The Russian economy performed at least slightly better in the first quarter ofthis year overall compared to the halt of growth in the second half of 2017. The economy ministry estimates first-quarter GDP grew by more than 1 % y-o-y, up from less than 1 % in 4Q17.

Seasonally adjusted industrial output, however, fell again in February and grew only slightly in March. Even if on-year growth in the first quarter was nearly 2 %, March industrial output was lower than in spring and summer 2017. Output of mineral extraction industries was up this year after hitting bottom late last year, rising by about 1 % y-o-y in the first quarter. Manufacturing output has remained unchanged this year, while from a dip in 1Q17 output has increased by over 2 %.

Seasonally adjusted retail sales have continued to recover this year, albeit slowly. Retail sales in the first quarter were up by over 2 % y-o-y. A gradual recovery in real household incomes has supported consumption. Real incomes were up in the first quarter by 3 % y-o-y (if the one-time pay-out to pensioners early last year is excluded). Public sector wages rose rapidly.

Real growth of core sectors of the Russian economy, 2015−18 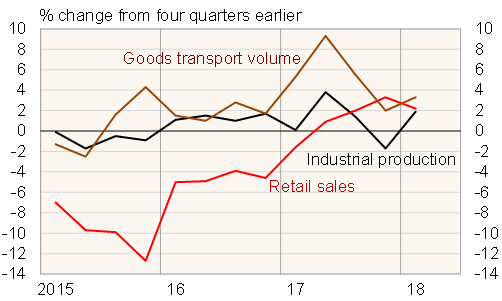