Revenuesto the federal budget continued to climb up rapidly in the first quarter of this year, rising by well over 10 % from a year earlier. Most of the revenue increase came from higher oil and gas tax revenues, which were up by over 20 % y-o-y. Rising revenues from value-added taxes provided an increase in non-oil revenues.

"Additional" budget revenues from oil and gas taxes in the first quarter corresponded to a whopping 3 % of GDP. Under the federal budget rule, additional revenues from oil and gas taxes are those resulting from an oil price above the "basic price" set in the rule (that price is applied to define budget expenditures). For this year, the budget rule sets a basic Urals oil price of slightly below $41 a barrel. The revenue projection of the approved federal budget assumes a price of just $44. In fact, the realised average Urals price in the first quarter was $65. The rule requires additional oil revenues to be set aside. Last year's excess oil earnings amounted to almost 1 % of GDP. The income set aside may be used later to cover budget deficits.

The past four quarters have seen the federal budget deficit decline to under 1 % of GDP. Under the approved 2018 federal budget, spending hardly rises at all even in nominal ruble terms this year. As a result, first-quarter spending declined from a year earlier. Defence spending increased a bit and domestic security spending more tangibly. Other spending fell quite sharply. 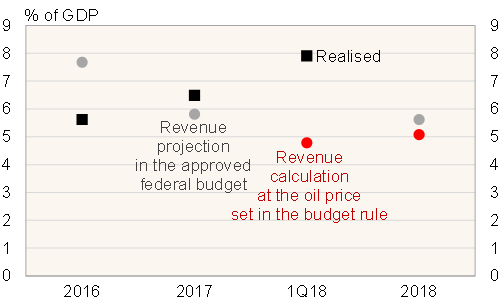