The average annual per capita disposable income of China's nearly 1.4 billion citizens last year reached about 26,000 yuan (USD 4,000). The annual disposable income of urban residents was about CNY 36,000 (USD 5,600), or roughly two-and-a-half times rural disposable incomes. Nearly 60 % of the Chinese population lived in cities at the end of 2017. While the share has risen rapidly, the extent of urbanisation could still increase further, and thereby sustain growth in incomes and consumption. For comparison, 83 % of South Koreans and 94 % of Japanese live in cities.

As the middle class grows and acquires more wealth, economic dynamics shift. This evolving structure of consumer demand also affects the trade flows to China. For example, the share of consumer goods and vehicles in total imports has risen faster than other types of imports. 24 million new cars were sold in China in 2017, while just over 17 million new cars were sold in the US.

Value of retail sales in China and the United States 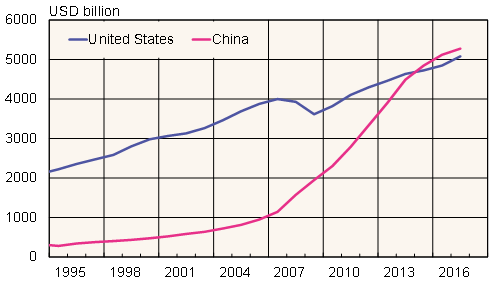