After years of contraction, Russia's total fixed investment grew by 4.4 % in 2017. The fresh Rosstat figures show, however, that the recovery in the first nine months of the year was more tepid than earlier figures suggested, and that strong growth was concentrated in the fourth quarter. Despite the come-back, fixed investment was still down by nearly 8 % from 2013, and on par with the 2008 or 2011 levels.

Fixed investment of large and medium-sized companies (LMEs) and the state sector increased by over 4 %. Rosstat regularly tracks these investments in its fresh investment statistics, and its figures show they have represented about 75 % of all fixed investment in the past few years. Rosstat estimates that other fixed investment (by small firms, households and grey economy) rose roughly 5 % last year.

Shares of oil & gas, electricity and manufacturing in total fixed investment of large and medium-sized companies and the state 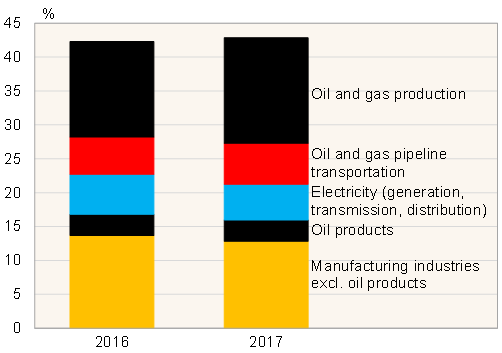