Consolidated budget revenues (federal, regional and municipal, plus social funds) increased by over 13 % y-o-y. However, 2016 was a low base year whether the funds received from the sale of a stake in the Rosneft oil company are included or not (here not included). Higher oil prices helped increase revenues via oil & gas tax income (up 23 %) whose share rose to close to a fifth of total budget revenues.

Other budget revenues rose by over 10 %, which is rapid even if the data was adjusted for inflation. Revenues from corporate profit taxes and goods excise taxes rose especially fast. Value-added tax revenues provided 17 % of total budget revenues and were up by well over 10 %, reflecting both economic recovery and improved tax collection. Mandatory social taxes on worker wages, which represent 22–23 % of budget revenues, still showed notably strong growth.

Growth in consolidated budget spending accelerated last year to over 6 % (here 2016 spending does not include the large sum granted to defence industry to pay off their bank loans). The growth in social security spending rose to over 10 % and the share increased to over 36 % of total budget spending. Spending on various sectors of the economy increased by over 10 % as spending on transport rose fast. Spending on space activity appears to have tripled and the sub-category of other spending on the economy grew quickly (these two lack further itemisations). After a long decline, spending on the housing sector jumped, mainly on big spending on housing by the City of Moscow.

The revenue bump helped reduce the consolidated budget deficit to around 1.5 % of GDP. 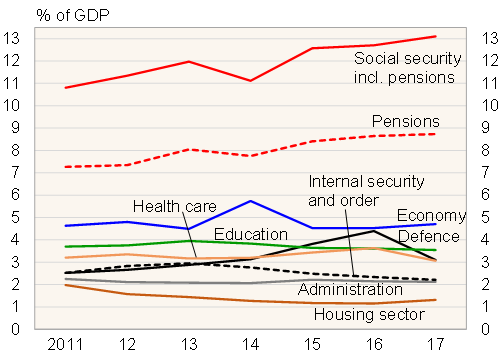