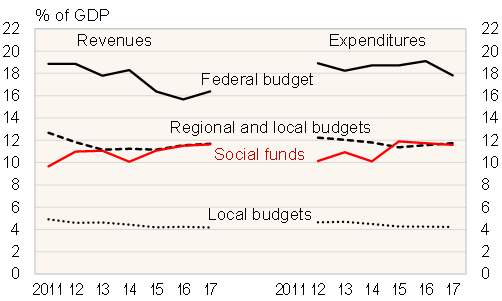 After contracting in most of the previous years, transfers from the federal budget to regional and local budgets increased by over 8 %. Tax revenues and payments flowing directly to these budgets maintained growth above 8 %. Revenue streams from corporate profit taxes and labour income taxes rose well. Expenditures of regional and local budgets increased by 9 %, due e.g. to spending on the economy, particularly the transportation sector.

The combined deficit of regional and local budgets nearly evaporated in 2016 and increased only slightly last year. The differences across regions, however, remained large when measured e.g. with the deficit relative to tax revenues flowing to the regional budget. Regions and localities over the past two years have as a whole managed to pay down their bank debts slightly. Last year the federal government in net terms hardly had to grant them any credit.