The value of goods exports rose by 15 % last year to 3.4 billion euros. Strongest growth was in the machinery & equipment category, with the value of exports rising by over 25 % y-o-y. Otherwise, export development varied. From core export product groups e.g. foodstuffs grew by 5 %, while exports of chemical products and metals contracted slightly. Russia's share of Finnish goods exports was still below 6 %.

Until last year, the value of goods exports to Russia declined four years in a row and hit bottom in 2016 with the value of exports less than half of the 2008 peak. At that time, however, nearly 40 % of exports consisted of re-exports, i.e. goods not made in Finland. For example, re-exports of passenger cars and mobile phones have nearly ceased. In recent years, re-exports have comprised about a quarter of Finland's exports to Russia, consisting mainly of pharmaceuticals and products in the machinery & equipment category.

Finland's services exports to Russia also revived last year, driven in part by services related to tourism. Overnight stays by Russian travellers in Finland increased by 16 % last year. In January-September, Finland's total service exports to Russia increased by 20 % y-o-y. Growth in goods and services exports should continue this year on recovering Russian demand, but the rate of growth is likely lower than last year. 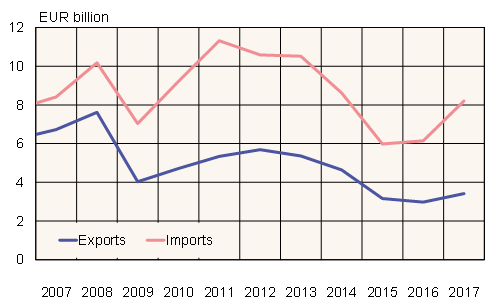