Stock markets nose-dived globally as unexpectedly strong economic figures lifted interest rates and increased expectations of accelerating inflation in the United States. The rise in volatility put share prices in free-fall and spread to all major exchanges. The reactions on Chinese exchanges were especially strong. Both Hong Kong's general Hang Seng Index, and mainland China's Shanghai Composite Index declined by over 10 % in the first two weeks of February. The Shanghai drop erased all of last year's gains on the Shanghai Index, which returned to the same level as at the start of 2017. The climb in Hong Kong share prices had been steeper, so after the correction the Hang Seng was still up by over 30 % from the start of 2017. Share prices have recovered somewhat in recent days.

Just before the New Year holiday, the yuan depreciated somewhat against the euro, the dollar and a trade-weighted basket of major currencies. The rise in US interest rates has narrowed the gap with Chinese interest rates and is expected to dampen appreciation pressures on the yuan. 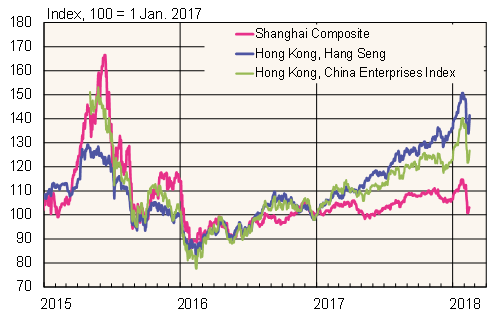