The rise in exports was due to both price and volume changes. Prices of oil and metals rose, while the export volume of oil and oil products contracted by 5 % and the export volume of metals remained flat. Natural gas export volume, in contrast, rose by about 5 %. The volume of exports of machinery, equipment & vehicles grew by 24 %, although presumably partly due to one-off deliveries. The volume of food exports grew by 22 %, mainly on last year's record grain harvest. Most of Russia's exports consisted, as usual, of oil, petroleum products and natural gas. They accounted for nearly 60 % of total exports last year. The preliminary estimate of the Russian officials of the value of arms exports last year was around 15 billion dollars, or about 4 % of goods exports.

All goods imports categories showed fairly brisk growth. Growth in the value of imports was led by machinery, equipment & vehicles (up 28 %), buoyed by a moderate recovery in investment demand. The value of imports of chemical products was up 17 % and foodstuffs 16 %. Imports in several food categories were also up slightly in volume terms.

The structure of goods trade by country remained practically unchanged. EU countries continued to account for over 40 % of Russia's trade turnover, Asian countries just under 30 %, countries in the Eurasian Economic Union 9 % and the US 4 %. China was Russia's largest single trading partner in terms of both exports (11 %) and imports (21 %).

Growth in value of Russian goods imports by country, 2017 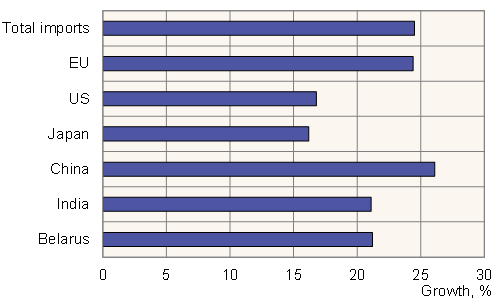