Total manufacturing output recovered only slightly last year. After two weak years, output in 2017 was still slightly below the 2014 level. Growth in the food industries, one of the largest categories in manufacturing, continued at 2–3 % pace as the rise in foodstuffs production accelerated. Growth of the chemical industry remained high, especially in pharmaceuticals but also e.g. plastic products.

Production of oil products increased by 1 % to the 2014 level. Forest industry growth was also further up to several per cent, mainly on higher production of paper products. Production of construction materials increased after two years of deep decline, while the metal industry slid substantially. 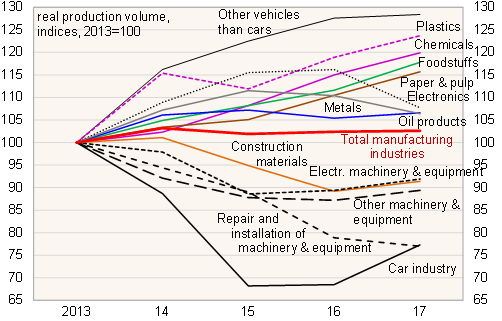