Preliminary figures from Rosstat show that Russian GDP grew by 1.5 % in 2017, slightly less than nearly all forecasters had expected. Recovery was relatively slow given that the oil price rose by over 25 % from 2016. On-year GDP growth fell below 1.5 % in the fourth quarter.

The rise in GDP was partly stymied by imports, which soared 17 %. The growth of imports relative to GDP growth was exceptionally fast. The rise in imports reflected the extremely low level of imports in 2016, a 25 % rise in Russian export earnings and real ruble appreciation of 16 % from 2016. Import growth cooled a bit in the fourth quarter, but was still 15 % y-o-y.

Most of the economy's demand categories rose in a good tempo last year. Growth in the volume of Russia's exports accelerated, reaching 5.4 %. Domestic demand increased by over 3.5 %. That was the pace of growth also in private consumption, which was reflected in rising domestic retail sales and sales of services as well as the spending of Russians when travelling abroad. Public consumption further declined slightly.

Fixed investments rose over 3.5 %. The Central Bank of Russia estimates that most of the growth in investments came from one-off government investments and construction of the Power of Siberia natural gas pipeline. Growth in inventories made an unusually large contribution to growth in domestic demand. The figures for GDP components in 2017 may see even substantial revisions later on as suggested by the large entry for "statistical discrepancy" in the preliminary figures.

GDP last year returned to its 2013 level. Consumption and fixed investments were still below the levels where they were half a decade ago, however. Imports were about 10 % below their 2011 level. 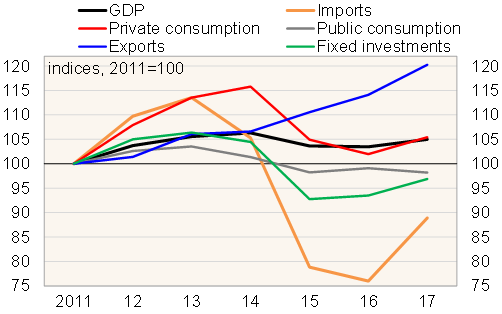