Last year,for the first time this millennium, the population of Beijing showed no increase. The population of Beijing was 12.6 million people in 1999, and 21.7 million in 2016. The city's official population last year declined by 22,000 people. Part of this reflected local government efforts to limit pollution, traffic congestion and internal migration. The shantytowns of migrant workers have been torn down and the operation of small business restricted. Factories, logistics centres, schools and hospitals have been forced outside the city limits. A cap on Beijing's permanent resident population has been set at 23 million until 2020. In Shanghai, China's largest city, the goal is to cap the population at 25 million by 2035 (the population was about 24.2 million in recent years).

The UN projects that China's population will peak at 1.43 billion about ten years from now, and thereafter begin to decline. While the one-child policy was replaced two years ago with a two-child policy, it appears that the change has done little to increase childbirths to the extent hoped for by policymakers. The new policy targeted annual births of 20 million. The actual number of children born in China in 2016 was 17.9 million. Last year's number was 17.3 million.

With lower birth rates and people living longer, China's dependency ratio is deteriorating rapidly. According to a UN forecast, by 2050 there will be nearly 70 dependents (children under 15 or adults over 64) per 100 working-age persons. In 2015, the number of dependents per 100 workers was just 37. Finland's dependency ratio in the same timeframe is expected to rise from 58 to 71. The measurement technique, however, underestimates China's true dependency ratio, because the retirement age is China is well below 64 years. Women typically retire between 50 and 55, while men retire at 60. The predicted shift in China's demographic structure increases the pressure on the central government to institute reforms, particularly in the areas of pensions and family policy. 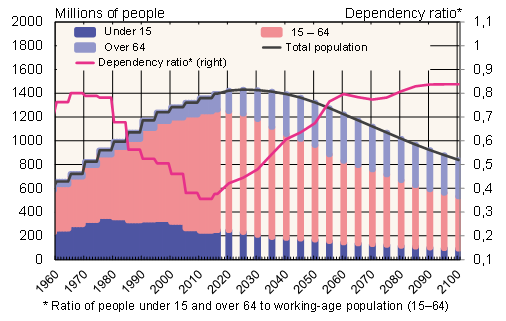