China is currently Finland's sixth top export destination and fourth largest provider of imports. Throughout the past century of Finnish independence, the importance of trade with China has grown – especially in the past decade. Prior to the 2000s, China never made the top-10 list of Finland's main trading partners. But Finnish exports to China soared in recent years, with the value of exports to China in January-September reaching 2.5 billion euros, nearly 6 % of Finland's total exports. In that period, the value of exports climbed 30 %, while total Finnish goods exports rose 15 %. The value of Chinese imports to Finland in January-September was 3.4 billion euros (up 13 % y-o-y).

Relations with the Republic of China (1912–1949) never amounted to much in the decades following Finland's independence in 1917. Finland, however, was among the first Western countries to recognise the People's Republic of China in 1950. Because the PRC emphasised self-sufficiency in its early years, relations remained modest. With the advent of major economic reforms in the 1980s, however, the importance of trade with China emerged. In the 1990s, Finland consistently ran goods trade surpluses with China. China's accession to the WTO in 2001 cemented its position as a global trade power. As trade increased, Finland began to run goods trade deficits with China. This is partly offset today by Finland's services trade surpluses with China.

For many years in the past decade, electronics accounted for at least half of Finnish imports from China. The current share is less than a third. The share of electronics in exports has fallen from almost 40 % in 2005 to 14 % in January-September this year. Machinery & equipment's share of total exports has fallen by half over the past decade and now account for less than 20 %. Pulp (19 % of exports in the first nine months of 2017) and wood (10 %) account for an increasing share of Finnish exports to China, while paper exports have declined. Exports of furs to China peaked in 2013, accounting for 14 % of total exports. This year furs accounted for just 5 % of exports. About 40 % of Finland's fur exports go to China. 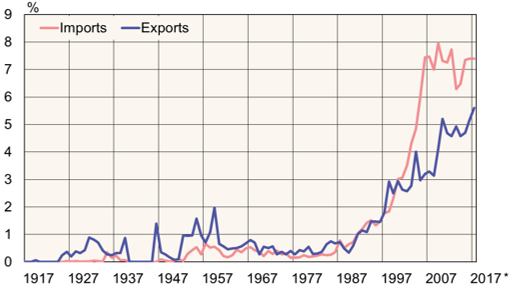