The recovery of revenues to the consolidated budget (combined budgets of federal, regional, municipal governments and state social funds) slowed in the third quarter of 2017 to 10 % y-o-y after soaring early in the year. On-year growth in the first nine months of the year was 14 %. Oil and natural gas revenues rose by 24 %, while the rapid increase in oil prices that characterised the first half of the year was no longer there to boost budget revenues. The 10 % growth in other budget revenues continued to outpace inflation. This applied to all large tax categories such as value-added tax and mandatory social taxes, and suggests that the tax bases have broadened somewhat. 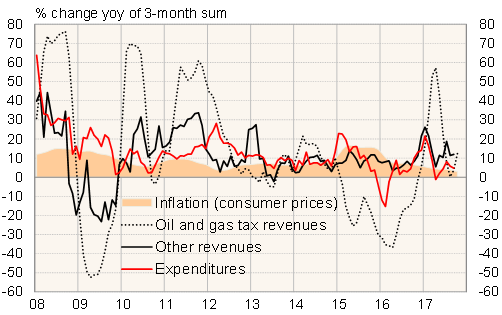 Consolidated budget spending rose in January-September by 6 % y-o-y. Several spending categories posted growth quite far from estimates for the year. Especially social security spending (up 13 %) has increased faster than scheduled. Spending was lower, however, for defence (down 8 %) and healthcare (down 7 %), while homeland security saw no increase, leading to performances well below estimates in these categories. Bursts of spending in these categories can be expected at year's end when total budget spending also typically soars. The finance ministry's 2017 spending growth estimates for the federal budget and social funds including supplementary budgets have risen to 8–9 %.

The consolidated budget for the first nine months of the year showed a slight surplus (0.6 % of GDP). The performance augurs a relatively small deficit for this year overall.