Finnish goods exports to Russia grew in January-September by 18 % y-o-y. While growth has slowed in recent months, it has remained brisk. Growth was led by machinery & equipment, but e.g. food exports also made a rather brisk recovery. The value of goods imports from Russia was up 45 % y-o-y in in January-September on higher oil prices and large gas pipeline deliveries in the first half. Still, the level of bilateral goods trade was well below peak levels of 2012–13. In January-September, Russia accounted for nearly 6 % of Finnish goods exports and under 14 % of imports.

During Finland's 100 years of independence, Russia and the USSR accounted on average for about 10 % of Finnish goods exports and imports. The share fell to zero during WWII and then soared to 30 % in the first years of Finland's war reparations to the USSR. The share again reached a new high during the oil price spike of the early 1980s. Since the 1960s, the trade has followed the price of oil, which largely determines Russia's export earnings and import demand. For decades, the bulk of Finland's imports from Russia have consisted of various forms of fossil fuels.

From 1861 to 1917, Russia accounted on average for 40 % of imports and exports of the Grand Duchy of Finland (Finland was then part of Russia).

The structure of Finland's exports to Russia has evolved and diversified notably over past decades from raw timber to metals, textiles and ships and further to today's emphasis on machinery & equipment and chemicals. The emphasis in services exports has shifted from construction projects to tourism. The significance of direct investments has also increased over the past two decades in parallel with trade. 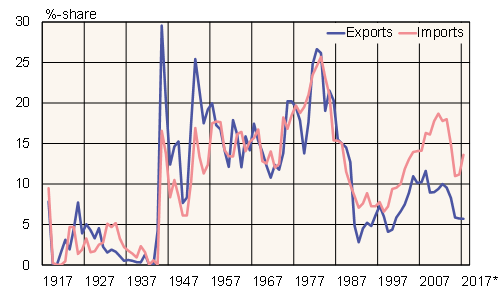