China claims that during its World Trade Organization accession talks, Western countries agreed that it would automatically be granted market-economy status 15 years from accession in December 2016. The US and EU, however, oppose the automatic grant of market-economy status with the expiry of its accession protocol. In their view, the state's pervasive role in the Chinese economy still distorts prices. China petitioned the WTO to resolve the matter. As the parties were unable to settle it among themselves, the dispute with the EU has already been moved before a panel selected by the WTO. The US last week submitted a brief from its trade representative to the WTO, laying out the case for not automatically granting China market-economy status.

As the market-economy dispute has smouldered, the EU has worked to update its own anti-dumping rules. The latest rules approved by the EU parliament in November imply that the EU can continue to use its old method of determining whether Chinese imports will be subject to retaliatory duties. The European Council has yet to approve the new rules.

Over the past five years, the global average for anti-dumping duties has been about 160 a year. The biggest duty-imposers are India and Brazil, but last year saw the US quite active as well. The hard US line is also highlighted by the fact that for the first time since the early 1990s, a US administration unilaterally launched an investigation into dumping of aluminium sheet produced in China. Generally, such clarifications are initiated at the request of the industrial branch.

China has also been active, imposing 11 anti-dumping duties last year and even more this year. The WTO said that China had already imposed 10 anti-dumping duties during the first half of the year. China's commerce ministry reports the country has since added a number of new duties. 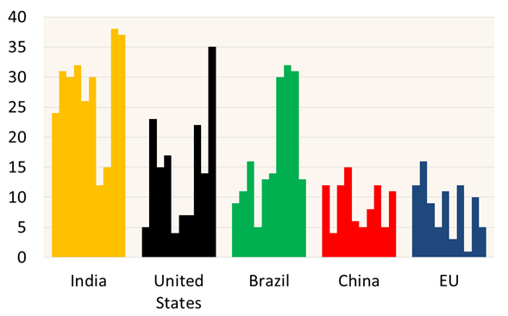