Especially the recovery in fixed investment of large and medium-sized firms, as well as government investment, slowed in the third quarter. In the first nine months of the year, the growth was just around 1.5 % y-o-y. Within-year statistics mainly cover these investments. In turn, Rosstat estimates investments by other entities such as small firms, grey economy actors and households. Rosstat says that the recovery of the estimated investments remained fast, holding at a pace of around 12 % y-o-y in January-September.

Due to the transport sector the investment recovery has had regional focuses. In the first nine months of the year, well over half of the increase in investment came from the City of Moscow (much of that were investments in land transport projects). Additionally, about 30 % of investment growth was generated in the Amur region (Power of Siberia gas pipeline) and Crimea (Kerch Strait Bridge). 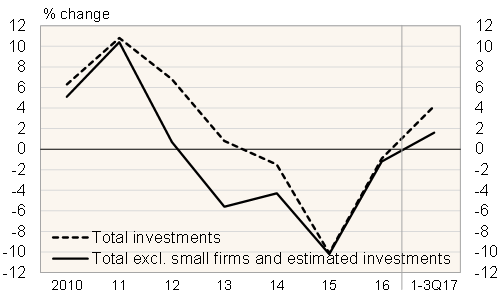