The finance ministry's consolidated public sector budget for 2018−20 (federal, regional and municipal budgets plus social funds) sees spending increasing at 3.7 % a year, or slightly less than forecasted inflation. Spending will be boosted e.g. by public sector wage increases. President Putin recently proposed that inflation adjustments to wages would be granted also to public sector workers who were excluded from the spring 2012 round of wage hikes. In addition, the minimum wage should be increased to the official subsistence minimum by the start of 2019. Wage costs account for over a quarter of consolidated budget spending.

Social spending, which accounts for 35 % of total spending, would increase by about 3 % y-o-y in nominal terms and contract in real terms. The reinstatement this year of inflation-indexing of pensions no longer applies to pensioners who remain in the workforce (official figures say about 35 % of pensioners still work).

The wage hikes will cause a brisk increase in spending next year on healthcare, education and administration. Healthcare spending will be further lifted by the continuing development of the new health insurance system. Healthcare spending should rise to nearly 12 % of total budget spending.

Spending in various sectors of the economy should increase at over 3 % a year, while spending on internal security and law enforcement will rise 2 % a year. Defence spending is planned to be reduced sharply next year, but it will still remain on the heightened level of 2012−13 even in real terms.

The 2019−20 spending estimates only serve as guideposts and are subject to change. In addition, the budget still has a relatively large amount of unallocated spending. 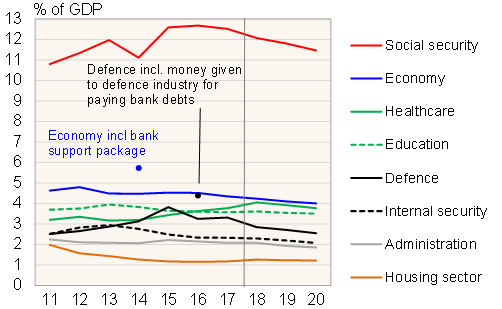