After a couple of months of weakening, the ruble’s exchange rate recovered in September and has since remained around 58 rubles to the dollar and 68 to the euro. Rising oil prices have supported the ruble’s ascent as they have increased Russia’s export earnings and the trade surplus (especially with slowing growth in imports). Although the net capital flow has in recent months turned again outwards from the country, the amount has remained modest.

There are no large upward or downward pressures on the ruble’s exchange rate on the near horizon as markets expect oil prices to remain near their current level in coming months. Capital outflows could accelerate slightly in December, which traditionally sees a spike in paying down foreign debt. Most debt has in earlier years been rolled over, however.

The ruble’s nominal and real effective (trade-weighted) exchange rates in January-September were about 20 % higher than in the same period in 2016. 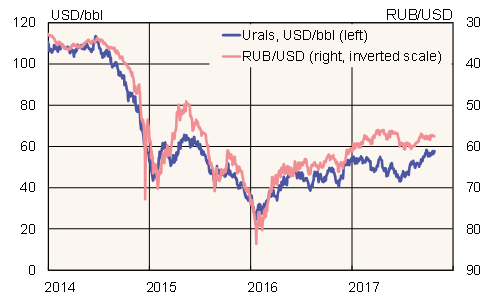