China Customs reports that the value of goods imports in dollars rose by 19 % y-o-y in September. The rate of growth was roughly the same as the average of the previous eight months of this year. The total value of goods imports in September amounted to 170 billion dollars, which is the highest monthly value since 2014. While much of the sharp increase in the value of imports was propelled by rising commodity prices, the volume of imports was also up by about 10 % this year. In geographic terms, imports from Africa, Australia and South America showed highest growth in January-September (20–40 %), but import growth from the EU, Japan and the US was also brisk (15–20 %). The biggest import decline was for Hong Kong, which saw imports shrink by over 60 %. Hong Kong's census and statistics department reports the special administrative region's exports to China have risen by 10 % this year.

In dollar terms, the value of Chinese goods exports rose by 8 % y-o-y in September, the same average rate of growth for the first eight months of the year. January -September export volumes were up 8 % y-o-y. The value of exports in September was nearly 200 billion dollars. The fastest growth in exports this year has been to North and South America (10–12 %), while exports to Africa have contracted slightly.

As a result of high import growth, China's goods trade surplus fell significantly. For January-September 2017, the surplus was just 300 billion dollars, or 100 billion dollars less than in the first nine months of 2016. 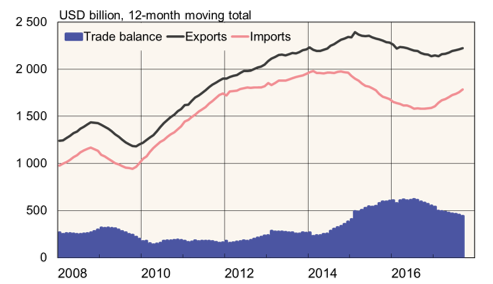