Preliminary balance-of-payments figures for the third quarter show revenues from exports of goods and services rose by about 15 % y‑o-y. For the first three quarters, on-year growth was about 25 %. The rise in oil prices has slowed from the first half of the year, however. Growth in the services exports also slowed.

Growth in Russian spending on imported goods and services slackened in the third quarter, but growth was still well above 15 % y-o-y. For the first three quarters growth was 23 % y-o-y. The slowdown in the very rapid recovery concerned imports of both goods and services, including spending abroad by Russian travellers. In euro terms, total third quarter spending on imports was about the same as in 2011. 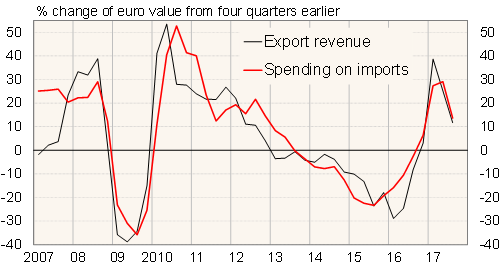