Although a detailed breakdown of the financial account figures is still forthcoming, it is clear that the net capital outflow from China has slowed significantly from 2015 and 2016. In the first half of 2016, the financial account and the "net errors and omissions" term, which together indicate the net outflow of capital from China, reached nearly 270 billion dollars. In 1H17, the net capital outflow was just 40 billion dollars. At the same time, the depletion of foreign currency reserves halted and even recovered slightly. Monthly figures show that China's foreign currency reserves last month rose by 24 billion dollars to 3.08 trillion dollars. Most of this increase likely reflects appreciation of the euro and other major reserve currencies against the dollar. 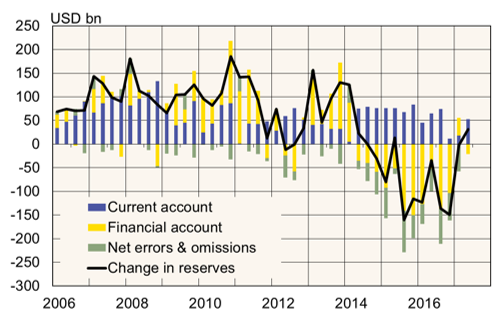 In order to stem capital outflows, falling currency reserves and depreciation pressures on the yuan, Chinese officials have substantially tightened capital controls and regulatory oversight. One major focus of the recent tightening has been on foreign investments of Chinese firms. Balance-of-payments figures show that outbound foreign direct investment of Chinese firms in 1H17 amounted to just 40 billion dollars, down from 124 billion dollars in 1H16. Despite efforts to encourage capital imports, first-half FDI inflows to China fell from 75 billion dollars a year earlier to 55 billion dollars.

While the payments balance has levelled off, efforts to correct imbalances through administrative decree are unlikely to put China on a sustainable footing. Circumvention of regulations is common. Indeed, some of the reduction in the current account surplus comes from an explosion in tourism spending that many suspect includes substantial amounts of illicit capital exports. Officials are responding to the situation by increasing the monitoring of use of payment cards by travellers abroad starting from September. The current round of regulatory tightening, however, does not tackle the natural need of Chinese firms and households to diversify their operations and investments. The need for diversification goes up when domestic uncertainty and risks are heightened by rising mountains of debt, the emergence of asset bubbles and political foot-dragging on needed reforms.