Industrial output growth continuedin the first half of this year in all of Russia's eight federal districts (each district comprising several administrative regions). Production rose by 1.5–2 % y-o-y in the Northwest, Central and Volga Federal Districts, as well as in the mega area of Moscow City and the surrounding Moscow region. In other major federal districts and Saint Petersburg industrial output continued to rise at a 3–4 % pace.

Over the past couple of years, neither industrial output overall nor manufacturing overall has not contracted in any of Russia's federal districts. Industrial output has even increased briskly in 2015–16 and this year in the Southern Federal District due to high growth in manufacturing and in the Far East Federal District driven by growth in the mineral extraction industries.

Of Russia's over 80 administrative regions, about a dozen in recent years witnessed no contraction or only slight contractions in retail sales to 2013–14 levels. Most regions have experienced a fall in retail sales to roughly the same levels that prevailed in the early years of this decade. The retail sales volumes in nearly 20 administrative regions both overall and per capita have sunk to levels similar to those last seen in 2005–08. Among them, Moscow is rather specific as considerable parts of retail sales and also industrial production have over many years moved out of Moscow City to the surrounding Moscow region. 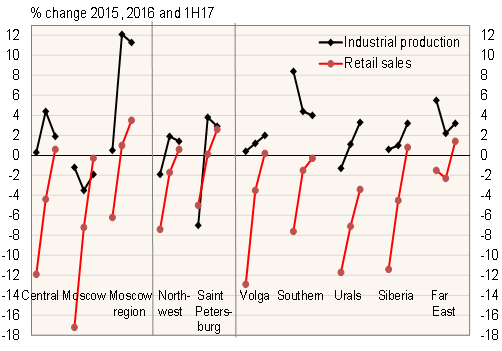