Growth in Chinese foreign trade has recovered significantly after a weak development seen in recent years. China customs reports that the dollar value of goods exports has grown this year by nearly 10 % y-o-y and goods imports by close to 20 %. Rapid growth in imports in particular reflects higher commodity prices than last year, but the rise in the volumes of exports and imports has been rapid too, both increasing nearly 10 % y-o-y in 1H17. The resurgence of foreign trade has been quite broad-based both by commodity group and by country. Trade figures of customs authorities in other countries confirm the strong growth in China's trade, and tend to dispel suspicions that the sudden rise in goods trade involves greater evasion of capital controls than earlier. The suspicions initially arose when the recovery in imports began last year at the same time China cracked down on capital movements.

The recovery of exports has been promoted by weakening of the yuan's real effective (trade-weighted) exchange rate (REER) over the past year and a half, which has bolstered the price competitiveness of China's exports. The REER is now about 10 % weaker than at the start of 2016. The pick-up in Chinese export growth has also boosted imports, as China still continues to import a relatively large share of components for assembly or further processing before they are exported further along the production chain. This "process trade" currently represents a third of all Chinese exports. 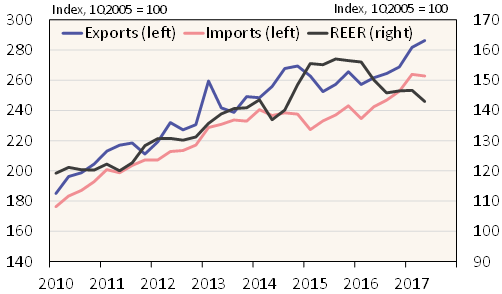