Rosstat preliminarily estimates Russian GDP grew by 2.5 % y-o-y in 2Q17, up from 0.5 % growth in the first quarter. The 2Q acceleration seems to be partly supported by temporary factors, so growth should slow down again in coming months. For the first half overall, GDP grew at a rate of 1.5 % y-o-y. BOFIT's most recent forecast (spring 2017) sees GDP rising by 1.5 % this year overall.

Several forecasters have slightly upped their predictions on Russian GDP growth during this year. The most recent key forecasts see Russian GDP rising by 1–2 % this and next year if the oil price remains around 50 dollars a barrel. Modest recoveries in domestic demand and exports should fuel gradual growth. Forecasts for import growth range more widely: 2–10 % real growth this year and 2–4 % next year. 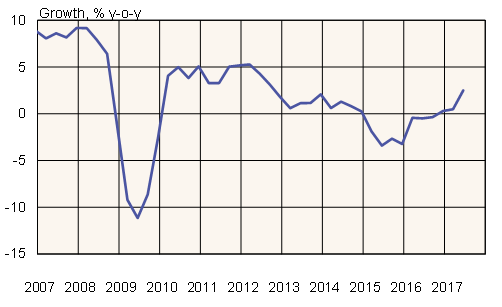