Growthin industrialoutput jumped to nearly 6 % y-o-y in May. Last month's growth was supported by manufacturing. However, the development of manufacturing output has been quite volatile this year due to e.g. variation in the number of workdays. Manufacturing grew by less than 1 % in the January-May period, while mineral extraction industries experienced growth of nearly 3 % y-o-y. Crude oil production was up by nearly 2 % y-o-y and natural gas production by 11 %. The increased production of mineral extraction industries helped boost transport volumes by 7 %, largely on higher pipeline transmission volumes.

Retail sales also appear to be recovering at last, growing by 0.7 % y-o-y in May. Looking at Rosstat's updated figures, retail sales achieved positive 12-month growth in April, but just barely. Retail sales were supported by rising wages and slower inflation, but the overall real disposable household incomes have continued to contract slightly.

Growth in agricultural output slowed sharply from last year to just 0.6 % y-o-y in the January-May period. In contrast, the construction sector in May posted slight growth for the first time this year, even as housing construction continued to contract.

Most of Russia's modest recovery seems to be driven by the oil & gas sector. Rosstat reaffirmed its preliminary estimate that GDP grew 0.5 % y-o-y in the first quarter. GDP growth was largely supported by mineral extraction industries and the transport sector. This trend seems to have continued also in latest months. Recovery in other branches of the economy remains shaky, however, despite some positive signs. 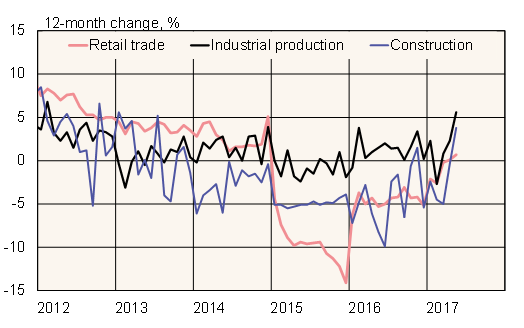