After a long appreciation trend, the ruble has begun to depreciate along with falling oil prices. The price of Urals-grade crude has fallen by 10 % in June to below $45 a barrel and the ruble's exchange rate has depreciated by about 4 % against the dollar and euro.

The finance ministry has continued its forex purchases as announced as oil revenues have exceeded the budget forecast. Even so, the forex buying is of such limited scale that it apparently has little impact on the ruble's exchange rate. In June, the oil price measured in rubles fell for the first time below the average oil price assumption in this year's budget.

The ruble is still about 10 % stronger in real terms against the dollar and euro compared to a year ago. 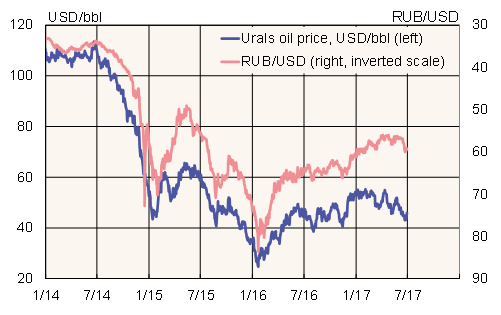