At its regular monetary policy meeting on June 16, the Central Bank of Russia's board decided to lower its benchmark 7-day repo rate by 25 basis points to 9 %. The CBR key rate, a major monetary policy tool, has already been trimmed three times this year for a total of 1 percentage point. Declining inflation has been the main justification for the rate cuts. This spring, inflation fell to a level close to the CBR's 2017 target of 4 %. The monetary policy stance remains relatively tight, however, as inflation expectations are still quite high.

In conjunction with the CBR's regular board meeting, an updated forecast was released. The rise in crude oil price assumption from 40 dollars to 50 dollars a barrel in 2017 resulted in a slight increase in this year's growth forecast. GDP is now expected to increase by 1.3–1.7 % this year and by 1–1.5 % next year. 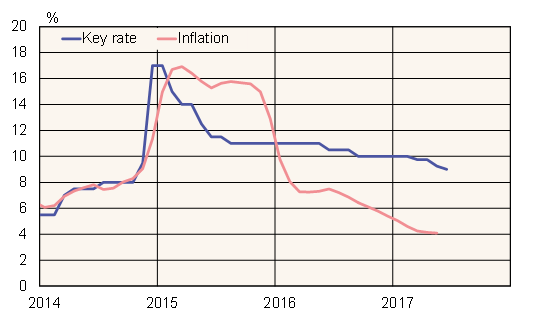