President Vladimir Putin recently proposed that wages funded out of public sector budgets should be raised also for those public sector workers not included in the instructions issued in May 2012 in connection to his inauguration to a third presidential term. The proposed wage hikes would consider inflation and the condition of federal and regional budgets. Putin requested that the cabinet prepare options for the wage hikes in such a schedule that the increases could be included in the 2018 budget drafting process.

Labour and social protection minister Maxim Topilin said that the new wage hikes would at least compensate for inflation for all recipients, but that the increases would not necessarily be equal for all recipients. Topilin confirmed that the May 2012 instructions on increases will be implemented implying that in the beginning of 2018 the wages of several worker groups in the social, healthcare, education and culture fields should equal 100 % or 200 % of the administrative region's average wage. Putin acknowledged that certain regions have had trouble meeting these targets. To be able to fulfil the targets, regions will continue to be supported by transfers from federal to regional budgets as in previous years.

Putin drew attention to the fact that wages of public sector workers outside the scope of the May 2012 instructions have not been allocated additional budget money for wage increases for couple of years. High inflation and small wage increases have caused a significant decline in real wages in recent years in major branches of the public sector such as education, healthcare and civil and defence administration. 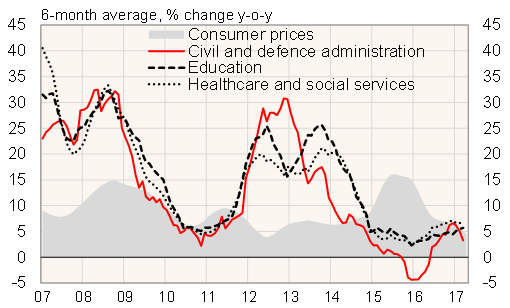