China Customs reports that the dollar value of goods exports rose 8 % y-o-y the first five months of 2017. The value of goods imports in the first five months of the year was up 20 % y-o-y. The last time the growth pace in January-May was this robust was in 2013. Strong export trends were supported by the yuan's weaker exchange rate against the dollar compared to last year. The volume of foreign trade has also grown rapidly as the volume of exports grew on average 8 % y-o-y and imports 13 % in the first four months of the year.

The value of Chinese goods exports to both the EU and the US grew by 10 % in the January-May period, and was slightly higher than the average growth of Chinese goods exports. The value of goods imports increased sharply for the United States (up 20 %) and the EU (up 16 %). The mirror trade figures from US and EU customs on goods trade with China largely confirm the robust growth in goods trade shown in the Chinese figures. The differences this year between the Chinese trade figures and the US and EU mirror figures have remained largely unchanged from previous years. Foreign trade can be considered as a tool to circumvent China's capital controls, which China has been tightening since last autumn.

US and EU goods trade with China 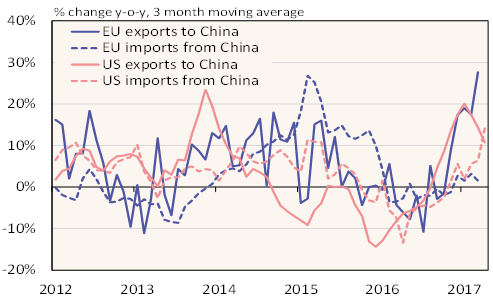