Given that over half of the weight of firms listed on the Moscow stock exchange are firms involved in the oil & gas industry, it is not surprising that the Moscow stock exchange indices rise and fall in tandem with oil prices. The price of Urals crude has fallen 10 % in dollar terms this year, while the Moscow exchange's dollar-denominated RTS index is down 9 % for the year so far. Observers attribute part of the stock market decline to profit-taking by some investors following the surge in share prices last year and loss of hope for an early lifting of US sanctions on Russia.

Similarly, the ruble's exchange rate tends to follow oil prices. However, even with falling oil prices, the ruble this year has appreciated 8 % against the dollar and 1 % against the euro. Many analysts attributed the ruble's rise to short-term "carry trade" with attempts to exploit Russia's relatively high yields. Central Bank of Russia governor Elvira Nabiullina noted, however, that the level of carry-trade operations in Russia has been moderate. The CBR sees the ruble's appreciation as stemming from seasonal fluctuation in the trade surplus, capital inflows associated with the Rosneft share sale last December and an increased foreign investor interest in the Russian market. 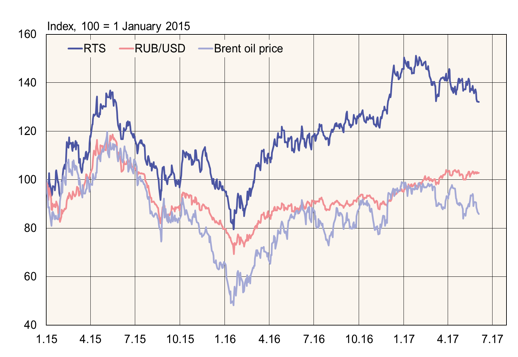