Higher-than-expected oil prices have increased Russia's budget revenues and finance minister Anton Siluanov notes that the government has up to0 now been able to finance budget spending out of pocket this year without resorting to oil funds. Under the recently revised budget estimate, the plan this year still calls for withdrawing a total of about 1.7 trillion rubles to cover the federal budget deficit. The current plan sees draining the Reserve Fund entirely this year and funding most of the remaining deficit out of the National Welfare Fund. Siluanov expects the government to start dipping into fund assets sometime in the autumn.

As of end-May, the value of the Reserve Fund stood at 930 billion rubles (USD 16.5 billion), while the National Welfare Fund stood at 4.2 trillion rubles (USD 74 billion). Slightly over a third of the National Welfare Fund is invested e.g. in investment projects of Russian companies and long-term bank deposits. Thus, the total liquid assets of the oil funds correspond to about 4 % of GDP.

The budget framework for 2018–2019 calls for a large part of National Welfare Fund assets to be used to cover budget deficits in coming years. The fund is expected to hold about 2.8 trillion rubles at the end of 2019, of which 1.3 trillion rubles would be held as highly liquid assets. 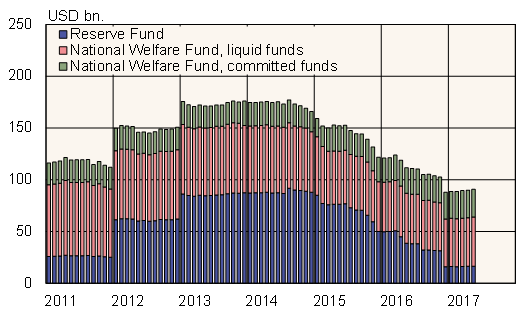