China Customs reports that the dollar-value of goods imports increased by 23 % y-o-y in the first quarter. Similar robust growth figures were last seen in 2011. Exports also rose in the first quarter, but at a rate distinctly lower than imports. Thus, the trade surplus shrank considerably. High growth was also seen in the volume of imports, which rose by nearly 20 % in January-February. Export volumes were up nearly 5 %.

It is challenging to identify any specific factors behind the current revival in imports; the growth in Chinese imports stretches across the board. Looking at the various goods categories, imports of machinery & equipment were up sharply. Import growth of key commodities such as crude oil, coal, pulp and certain farm products was also brisk. By country, imports from nearly all of China's main trading partners saw strong gains. The value of imports from the EU increased by 15 %, by 30 % from the US and by 20 % from Japan. Imports from many emerging economies also showed vigorous growth. In contrast, the value of imports from Hong Kong in the first quarter shrank by half from a year earlier. Much of this is believed to reflect improved enforcement and oversight of capital controls last autumn. The Chinese have long used goods trade as a means for circumventing capital controls. 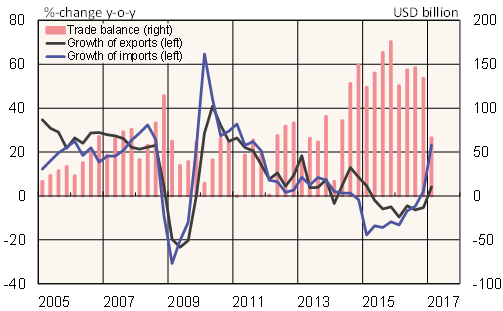