Most of the growth in revenues came from oil & gas tax revenues that jumped by one half from their bottom in 1Q16. The key driver was higher oil prices, which were up in dollar terms about 60 % y-o-y in the first quarter. On the other hand, the considerable on-year rise in the ruble's exchange rate limited the increase of oil & gas revenues in rubles (the taxes are essentially based on dollar pricing of oil & gas).

Federal budget spending has increased quite moderately from its lows in early 2016, even with pensioners this year receiving their sizable one-time pay-out from the federal budget. In real terms, first-quarter spending was much lower than in several years preceding 2016. Defence spending fell markedly from 1Q16. On the other hand, at the end of last year the defence industry received a grand sum paid out from the budget for paying off a large part of their existing bank loans, which was aimed at creating more room for new borrowing by the defence industry. 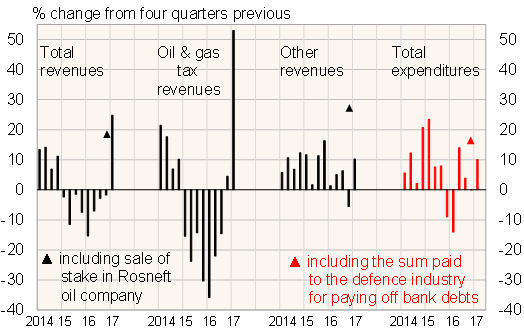