Rosstat has released more data based on new industrial branch classifications and other statistical changes. The new data now reach back to the start of 2014. The new figures show that Russian industry as a whole almost avoided a downturn over the past two years and only experienced a rather small contraction of production in 2015. Rosstat earlier this year laid out the reasons for its industrial output data changes (BOFIT Weekly 9/2017).

During the economy's recession, mining and quarrying (or extractive industries) all the time showed growth that was slightly higher in the new data. Figures on production and supply of electricity, gas fuel & heating were revised upwards.

The new figures show that the downward slide in manufacturing output in 2015 was quite moderate, although the situation has deteriorated this year. Output performed better in many manufacturing branches in 2014–2016 than the old Rosstat figures indicated. Comparison of old and new industrial output data is complicated by the reclassification of industrial production activities. Under the old classification, there were 14 main manufacturing branches; now there are 24. The main category for production of machinery, equipment & transport vehicles is now divided in 6 branches instead of 3 earlier. The food industry, beverages and tobacco products are now their own main categories, and pharmaceutical products are separate from the chemical industry. 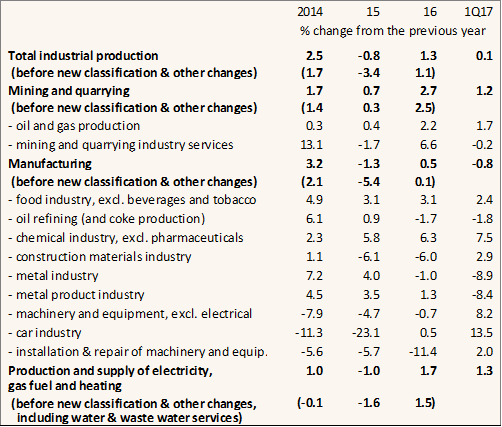