The ruble has appreciated this year about 8 % against the US dollar and 5 % against the euro. The ruble has been supported by strong trade surplus and increased interest of foreign investors in the Russian market. The ruble has been on a nearly continuous upward trend after hitting the bottom in the first months of 2016, although strengthening has slowed down recently. In March, the ruble's real effective (trade-weighted) exchange rate was up nearly 30 % y-o-y.

In Russia, exchange rate shifts tend to pass through relatively quickly and strongly to consumer prices, so ruble strengthening tends to curb inflation. Ruble appreciation also reduces the government's ruble-denominated tax revenues, because oil taxes are largely based on the price of oil in US dollars. On the other hand, lower inflation enhances the purchasing power of tax revenues. For households, a stronger ruble means imported goods and services are more affordable. 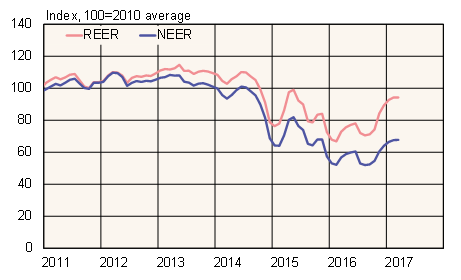 From the standpoint of Russian domestic businesses, a stronger ruble reduces their price competitiveness with respect to imports, but also lowers the cost of imported technologies and intermediates. Recent surveys show that most Russian manufacturers are relatively highly dependent on imports. Ruble appreciation also reduces the costs of foreign debt service for firms.

The trend in the volume of Russian exports is not particularly sensitive to exchange rate fluctuations. The bulk of Russian exports consists of oil or oil products that are based on world-market dollar prices, and demand reacts slowly to price changes. A stronger ruble does, however, lower the ruble revenues of the companies. Ruble appreciation also weighs on the price competitiveness of other exports (e.g. wood products and metals).