Preliminary balance-of-payment figures from the Central Bank of Russia indicate that the dollar value of Russian goods and services imports increased in the first three months of this year by more than 20 % y-o-y (16 % in euro terms). Goods imports rose much faster than services imports. In the services imports category, tourism showed the highest growth (up 18 % y-o-y). The value of exports of goods and services in dollar terms was up over 30 % y-o-y, mainly on higher oil prices. The 1Q17 current account surplus was USD 23 billion or nearly as much as for all of 2016.

The financial account showed that the private sector net capital outflow increased substantially from a year earlier, reaching USD 15 billion in 1Q17 (compared to USD 19 billion for all of 2016). The biggest impact came from the soaring increase in the foreign accounts receivable of Russian banks. Some analysts have suggested this might be related to financing of the sale of a large stake in the state oil company Rosneft to foreign investors in December. There was a slight increase in the net inflow of foreign direct investment in non-banking Russian companies (to about USD 7 billion), while the net outflow of direct investments abroad by Russian businesses was nearly USD 8 billion. 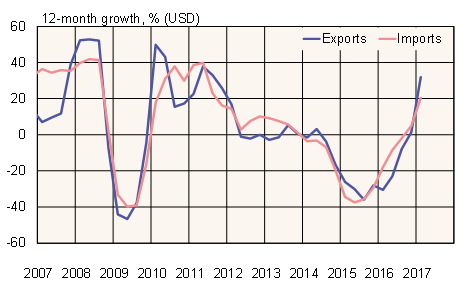