China's National Bureau of Statistics reports GDP grew by 6.9 % y-o-y in the first three months of 2017. A robust growth legacy from the last three quarters of 2016 was sufficient to produce a slight uptick in the growth, even as growth in the first quarter of 2017 was on annualized basis just over 5 %.

Industrial output, lifted by the recovery in heavy industry and the booming housing market, rose by nearly 8 % y‑o-y in March. Steel production hit an all-time high in March, even if it appears that demand failed to keep up with supply. Measured by floorspace, the volume of completed buildings increased 15 % y-o-y in 1Q17, while sales were up by 20 %.

Real growth in fixed asset investment (FAI) slowed to 5 % in the 1Q17. The drop was largely due to a slowdown in public investment spending growth from last year to 8 %. Private investment rose 3 % in real terms. Even with a pick-up in March, real growth in retail sales grew by just 9 % y-o-y in the first quarter. The slowdown in growth reflected lower car sales caused by a change in tax rules at the start of the year.

First-quarter economic figures can be interpreted in several ways. Structural change of the economy seems to be proceeding as 77 % of growth was generated by consumption (65 % in 2016), while investment contributed just 18 % of growth (42 % in 2016). Government consumption seems to have picked up. Public sector expenditure was up 21 % y-o-y in the first quarter, while household disposable incomes rose by 7 % in real terms. External demand recovered and the reported contribution of net exports to growth turned positive again.

Nevertheless, growth is still largely financed with new debt. Especially, financing from the shadow banking sector increased rapidly. The latest burst of economic growth has no sustainable basis, however, so it is critical that policymakers take advantage the current economic tailwind to rein in the growth of indebtedness and implement economic reforms. Economic growth at the end of the year is expected to slow and the real estate boom should subside as cities implement additional measures to slow rising housing prices. 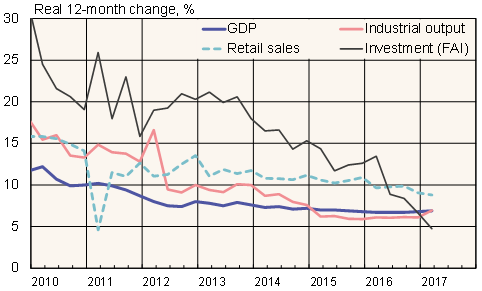