As elsewhere in the world, stock markets in China ended the year on down note. Uncertainty in China’s markets was fuelled by the government’s zero-covid policies and uncertainty about how long the policy would last, as well as the increased risks of policy and regulatory shifts. The Shanghai Composite Index was down by 15 % at year’s end, while the Shenzhen Composite Index ended down by 22 % for the year. The Hong Kong Stock Exchange’s Hang Seng Index fell by 18 % last year. The index of the largest traded firms on the Shanghai and Shenzhen stock exchanges (CSI 300) declined by 22 %, while the average price of growth firms included in the Shenzhen Stock Exchange’s ChiNext Index were off by 29 %. China’s market trends are in line with emerging market exchanges in Asia (the MSCI Emerging Asia Index fell by 23 % last year), whereas the overall performance of the world’s exchanges was only slightly better (e.g. the FTSE All World index fell by 17 % last year). 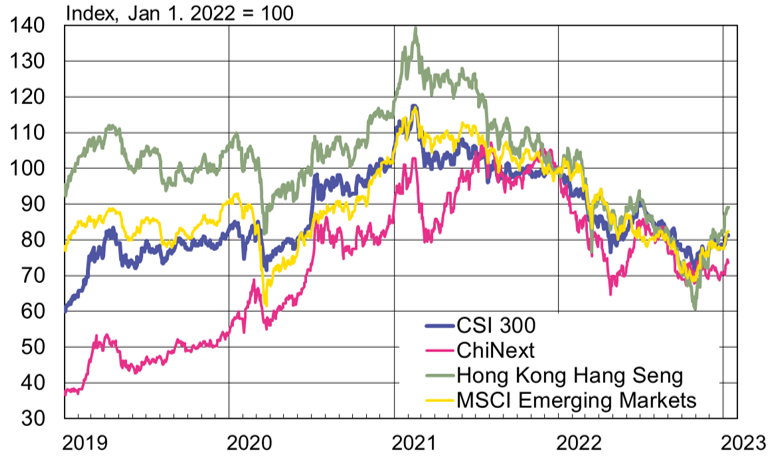 Chinese share prices have rebounded in the first two weeks of this year on investor expectations of an economy reinvigorated by the government’s surprise decision to abandon covid restrictions and regulatory roll-backs. The policy shift immediately brightened investor sentiment. The central bank’s deputy governor said last week that the government was ending its over-two-year regulatory crackdown on internet firms, which started with the last-minute scrapping of the Ant Group’s initial public offering in November 2020. The China Securities Regulatory Commission (CSRC) also announced at the end of November that it was ending its 12-year ban on new share sales by property developers. The money raised from new share sales must still be used for specific purposes such as paying down debt or corporate acquisitions. The move allows developers to raise money without increasing their indebtedness. Developer IPOs were banned by the officials in 2010 in an effort to stem soaring apartment prices and reduce speculation in land-use rights. The risk of Chinese firms being delisted on US exchanges has also subsided since China seems have granted permission to share the auditing reports of US-listed Chinese firms with American officials (BOFIT Weekly 52/2022). In the United States, the share prices of Chinese firms have risen by nearly 20 % since the start of this year (situation as of Jan. 12).

Over 400 IPOs were staged on the Shanghai and Shenzhen bourses last year. Also 80 firms listed last year on the recently established Beijing Stock Exchange (BOFIT Weekly 48/2021). By the end of 2022, 162 firms were listed on the Beijing Stock Exchange. The combined market capitalisation of those firms was 210 billion yuan (30 billion dollars). The Beijing Exchange’s market cap is miniscule, however, compared to the market cap of the Shanghai Exchange at 46 trillion yuan (6.7 trillion dollars) or the Shenzhen Exchange at 32 trillion yuan (4.7 trillion dollars). Beijing’s daily trading volumes have also remained modest. China regulates the IPOs of firms in order to support certain sectors. The Financial Times reported this week that the CSRC is banning firms operating in certain fields from new listings on the Shanghai and Shenzhen main boards. These categories include food & beverage chains, firms providing education services, firms involved in covid prevention and funeral firms. The goal is to direct financing flows to branches currently championed by the government (e.g. tech firms), where the present economic condition of the firm carries less importance. 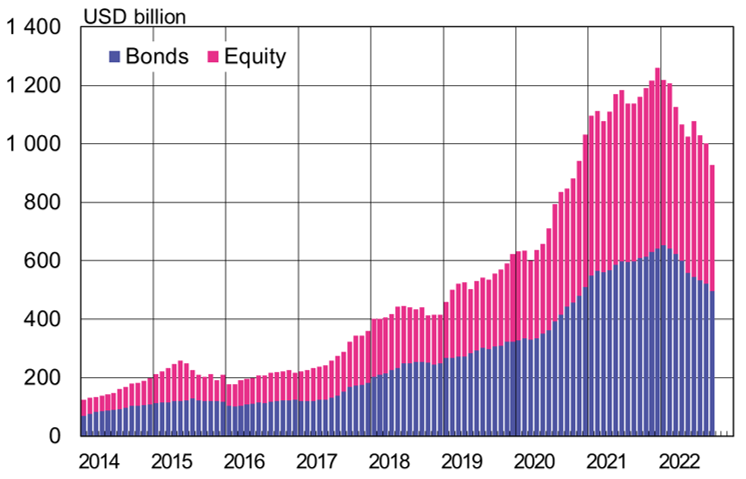