In mid-December, the US Department of Commerce added 36 Chinese firms to its entity list. Exporting US technology or goods and components manufactured using US technology to firms in the entity list is banned without special licence. Yangtze Memory Technologies Co. (YMTC), a company once slated to become a key supplier of flash memory chips, was included in the new listing. As a result, the entity list now includes all of China’s main chipmakers. Of these new firms, 21 (including YMTC) are now subject to a wider ban that includes third-country firms if their products rely on a sufficiently large percentage of components manufactured with US technology.

Protectionist measures in both countries have increased. In October, the US extended its semiconductor export restrictions on China (BOFIT Weekly 42/2022). The revised guidelines, however, call for more narrow application than earlier feared, and only affect US citizens or people with residence permits who are directly responsible for the exports of products or services to China. It does not apply to e.g. people performing routine administrative functions. China said it had filed a complaint this month with the World Trade Organization (WTO) about the new restrictions. Reuters reports that China is also planning a new spending package valued at more than 1 trillion yuan (143 billion dollars) to support China’s domestic semiconductor industry over the next five years. More detailed information is not yet available. The US announced in August a similar support package for its domestic semiconductor industry.

With the US-China trade war entering its fifth year, changes in the countries’ bilateral trade structure have become visible. Both countries imposed substantial tariffs on each other’s imports of critical product groups. According to a data analysis by the Peterson Institute for International Economics (PIIE), the value of US imports from China of products subject to a 25 % additional tariff, had, as of August 2022, fallen by 22 % from the pre-trade war period, while imports of similar products from other countries had increased by 34 %. For products subject to a 7.5 % additional tariff, US imports from China were only down by 3 % from the start of the trade war, and up by 45 % for similar products imported from other countries. On the other hand, products not subject to punitive tariffs saw the value of US imports from China increase by 50 % from the pre-trade war period. These products account currently for nearly half of US imports from China, up from just a third before the start of the trade war. The PIIE study noted that customs data provide little indication about value-added contribution of Chinese manufacturers or third-country intermediaries to US imports. Although the final assembly of many goods now takes place outside China, the Chinese value-added contribution could nevertheless be as large as it was previously.

A considerable amount of US production has been offshored to China, and China has become a major market for American firms. Available statistics suggest that the situation has stayed relatively stable, even if company surveys indicate that many firms increasingly voice their intent to site new investments outside China. The latest US figures for domestic firms and their foreign subsidiaries date back to 2020. The total net sales of all US foreign subsidiaries fell by 8 % y-o-y and the workforce was reduced by 2 % in 2020 due to the covid pandemic. US subsidiaries operating in China displayed a roughly similar trend. The number of subsidiaries remained constant, but the number of workers was cut by 5 % and net sales declined by 7 %. However, the net earnings of US subsidiaries operating in China rose by 2 % in 2020, while the earning of all US foreign subsidiaries fell down by 15 %. In 2020, the sales of US firms and their subsidiaries in China amounted to 525 billion dollars, just over three times the value of goods and services exported to China (167 billion dollars). China accounted for 7 % of the international sales of US firms and their foreign subsidiaries, as well as 9 % of their international workforce.

Despite the trade war and massive trade imbalance, US-China trade approached an all-time high in October 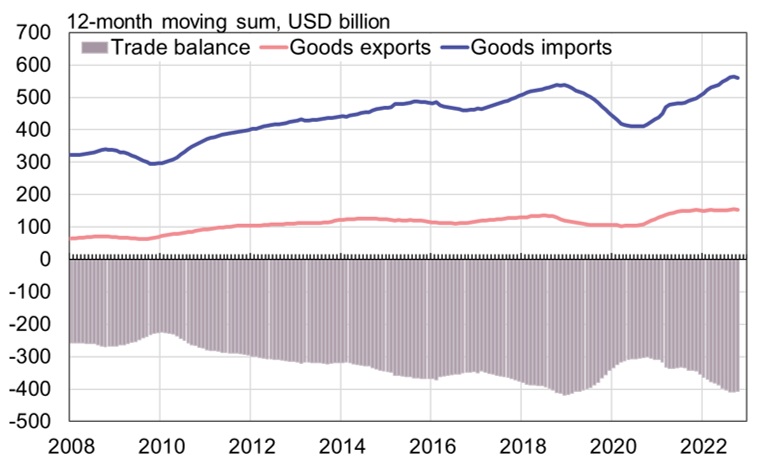