The Russian economy went into a tailspin in the weeks immediately following Russia’s invasion of Ukraine and further escalation of Western sanctions caused by the invasion. Last spring, the Moscow Exchange experienced its largest drop ever, the ruble’s exchange rate crashed to all-time lows and panic overtook the banking sector. The Central Bank of Russia (CBR) quickly responded with severe restrictions on capital and foreign currency markets to prevent a full-blown financial crisis and gradually managed to stabilize the markets. At year’s end, the MICEX index was down by 43 % for the year, while the ruble’s official exchange rate to the USD had appreciated 6 %.

Russian GDP began to contract last spring. In recent months, it has shrunk at a rate of 4–5 % y-o-y according to preliminary estimates from the economic development ministry. The December composite forecast of Consensus Economics, which averages the forecasts of major institutional forecasters, shows 2022 GDP dropping by 3.5 %. Growth trends varied considerably, however, depending on the branch. 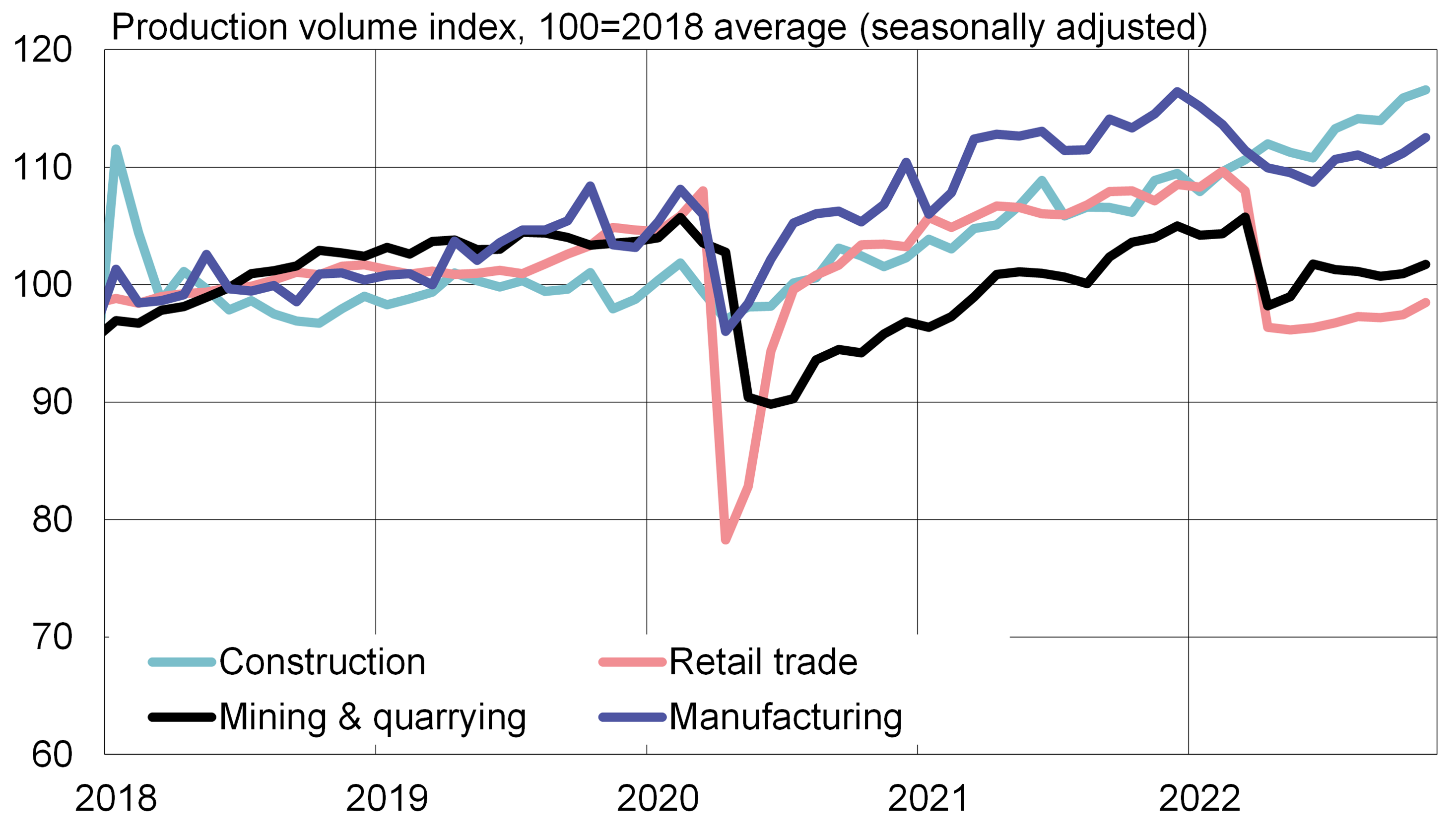 The largest contractions were seen in the output of industrial branches that rely on imports and foreign companies (e.g. production of passenger cars was down by 79 % y-o-y in November, excavators down by 80 % and washing machines down by 60 %). Lack of export possibilities also hit certain other industrial branches in November. For example, wood processing was down by 21 % y-o-y and production of natural gas (excluding LNG) by 16 % y-o-y.

Retail sales, a good proxy for consumption trends, has contracted sharply. The volume of November retail sales was down by 8 % y-o-y. High inflation has eroded the purchasing power of Russian consumers, with consumer price inflation running at 12 % p.a. in November. Despite recession, the unemployment rate has remained low and continued to hover around 4 % in November.

Output has even increased in certain branches. For example, fabrication of metal products grew in November by 16 % y-o-y and production of special-purpose clothing more than doubled. The construction sector, supported by government infrastructure investment, has also experienced brisk growth.

Russia’s overall economic development continued to be supported by the all-important oil industry. Oil production rose in January-November by 2 % y-o-y. A large share of production goes to exports. The volume of Russian crude oil exports only began to shrink in the final months of last year. While the EU’s ban on imports of Russian crude oil took effect in December, the import ban on petroleum products only enters into force at the beginning of February. Russia sought out new oil export markets last year, most notably India.

While high commodity prices drove Russia’s export revenues to historical highs, imports started to contract sharply last spring due to sanctions and the collapse of the ruble’s exchange rate. Limits on capital flows and economic sanctions have reduced capital flight from Russia, so Russia’s record-high export earnings largely remain in Russia. This initially led to sharp ruble appreciation, but recently these trends have reversed. Preliminary data suggest the volume of Russian oil exports declined in December and export prices fell. The drop in export revenues has led to a decline in Russia’s current account surplus and depreciation of the ruble. 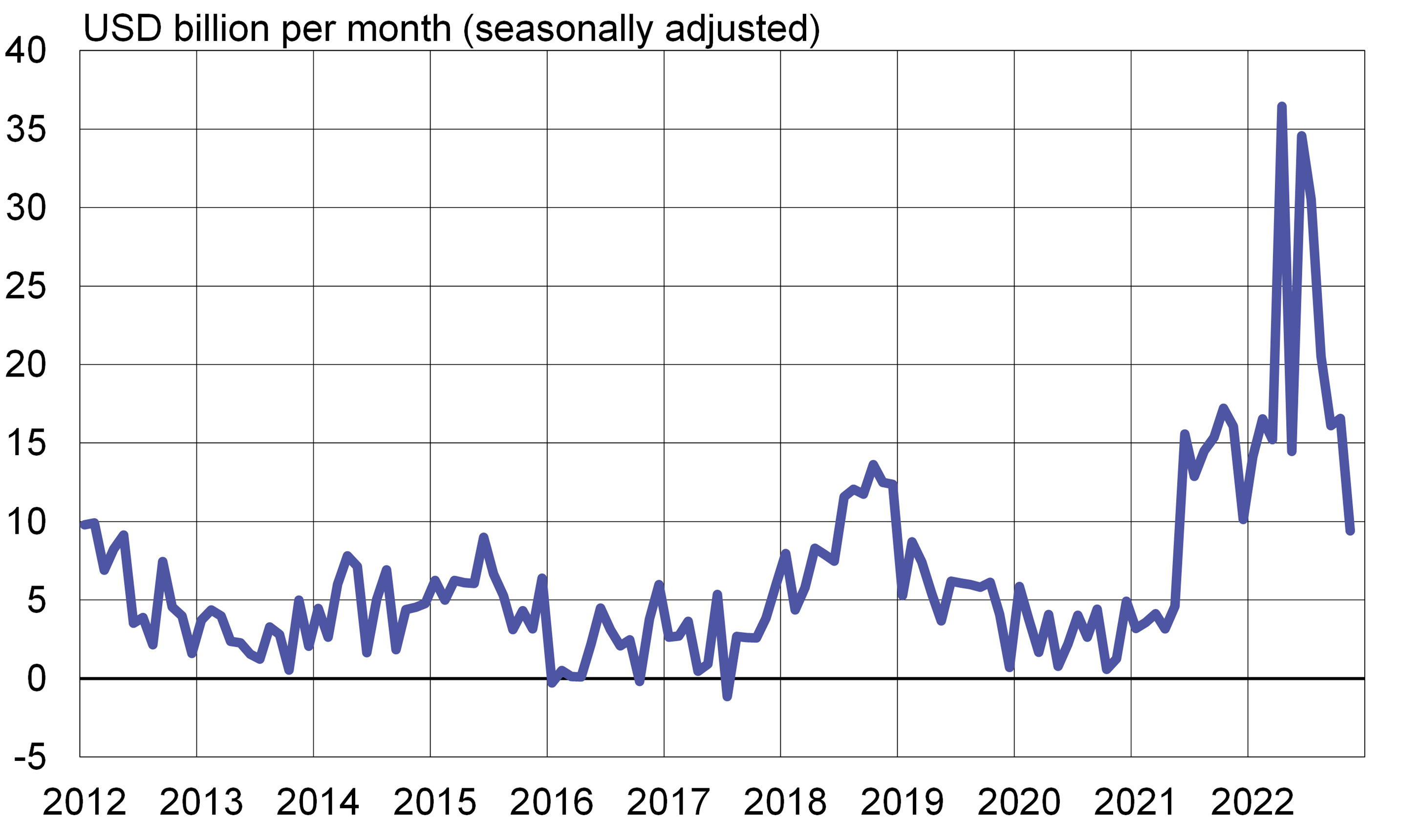 The weakening of oil exports and economic recession are reflected in Russian government finances. Finance minister Anton Siluanov recently evaluated that the federal budget deficit in 2022 would be much higher than previously expected, reaching 2 % of GDP. The government piled on debt in the form of domestic bond issues in the final months of 2022 to finance the widening deficit. Windfall taxes imposed on some of Russia’s biggest commodity producers – most notably gas giant Gazprom – helped generate substantial revenues for the government at the end of last year.

The outlook is bleak as the Russian economy enters 2023 in recession, and recent key forecasts see Russian GDP contracting by 3–4 % this year. Exports should decline sharply as sanctions begin to bite. According to this year’s federal budget, government spending is set to remain flat. This implies a decline in real terms since most forecasts expect Russian inflation to average 4–6 % in 2023. Even with flat expenditure, the federal budget deficit is expected to reach at least 2 % of GDP in 2023. The risks of even weaker performance remain large, however, as long as Russia continues to conduct its war in Ukraine.

Format update: The format of the BOFIT Weekly Review will change slightly this year. Each month will include general overviews of the macroeconomic situation in Russia and China. Two other issues every month will delve into specific economic topics related to Russia, China or other emerging economies.