Chinese policymakers abruptly abandoned their strict zero-covid policy in early December as the futility of an all-out suppression strategy at preventing the spread of aggressive new omicron strains became evident. China’s public health officials currently expect the national infection rate to peak by the end of January, but some observers suggest the infection wave may have already crested or is just passing. With official mass-testing ended, it is impossible to give a reliable assessment of total infections or recoveries in China.

Daily metro ridership figures suggest the latest covid wave has already peaked at least in larger cities. Daily metro ridership has been a fairly reliable indicator of rising or waning infection rates and the intensity of lockdown measures. Ridership declined in the second week of December immediately after the government’s about-face on covid policy. The pace of recovery has varied from city to city, however. For example, the rise in metro ridership in Beijing and Guangzhou began in late December, while Shanghai followed about a week later. As of the second week in January, Shanghai metro ridership was still down by about 20 % from its highest levels during the COVID-19 pandemic, and down by over 30 % from 2019 levels. The lifting of domestic travel restrictions coincides with the traditional travel surge associated with the Chinese Lunar New Year season. After years of lockdowns and restrictions, Chinese can finally freely travel to meet friends and relatives in their home districts. Domestic air travel demand increased significantly in December, as did ticket prices.

The December readings of China’s official purchasing manager indices were somewhat lower than at the peak of the previous covid wave in April 2022. The manufacturing PMI fell to a below-neutral reading of 47, while the service sector reading dropped to 39. The PMI compiled by Markit Economics, which places a stronger emphasis on private firms and export firms, showed that economic activity for those firms also contracted. The cautious revival of mobility inside cities as well as domestic travel should foster a gradual recovery of private consumer demand and services in the coming months. However, the latest covid wave is unlikely to be the last.

China’s pandemic struggles are also echoed in port congestion. For example, the backlog of container ships stacked up outside Shanghai ports or the numbers of container ships forced to divert have repercussions for global production chains. The Kiel Institute, which tracks the number of container ships waiting outside e.g. the Shanghai and Zhejiang ports, estimates the global share of container goods tied up in logistical limbo hit its peak of 5.5 % in early 2020 during the first wave of the COVID-19 pandemic. In December 2022, that percentage of stuck goods rose again with the explosion in omicron-variant infections. Notably, the shift coincided with a sharp downturn in metro ridership. The recent recoveries in metro ridership likely augurs improving conditions at Chinese ports in coming weeks.

China’s lengthy quarantine requirements, which effectively prevented foreign visitors from entering the country, were lifted on January 8. Visitors are now only required to produce a negative covid test taken within the past 48 hours.

Metro ridership in Shanghai has recently increased, portending relief for the logjam of container ships 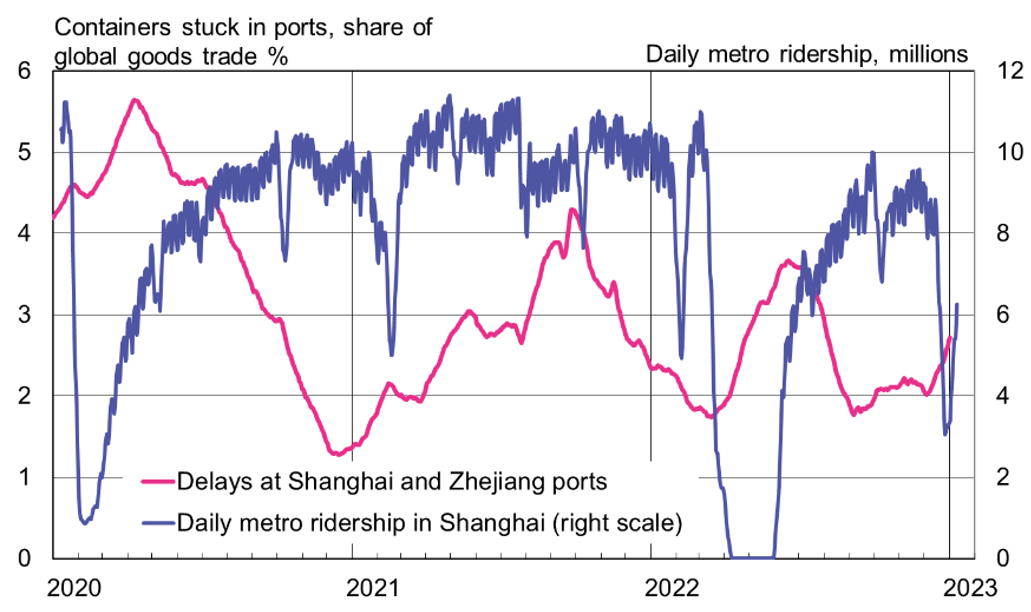