China is experiencing its third year of pandemic disruption and zero-covid policies. This situation has increased uncertainty among consumers and firms, hurting service-sector demand and boosting youth and migrant unemployment. In addition, real estate sector problems have reduced real estate investment and construction activity – and no quick fixes are in sight. As the global economy slows during the forecast period more than previously expected, growth in export demand also slows, adding to pressure from structural factors that already have long been a drag on economic growth. BOFIT’s latest Forecast for China 2022–2024 sees China’s real GDP growth falling to around 2 % p.a. this year and recovering to around 3 % in 2023 and 2024.

China’s latest released official GDP figures again appear to exaggerate actual growth. Thus, it is unlikely that official statistics will fully express slowing growth figures in the forecast period. Our forecast sees China’s growth over the next two years to be roughly in line with global economic growth. China has ceased its role as the engine of global growth.

We expect growth in consumer demand and fixed investment to remain low this year due to covid restrictions and problems in the construction sector. Growth in net exports, however, will still support overall demand growth this year. Export growth should slow considerably next year and the contribution of net exports to economic growth turns negative. Consumer demand is expected to account for a larger share of economic growth next year than this year. Sustained economic growth requires policy measures that support a transition to a more consumption-driven economic paradigm. We expect the ratio of consumption to GDP to decline slightly this year from 54 % in 2021, and only rise slowly in 2023 and 2024.

Improvements in productivity are needed to sustain future growth as China’s population begins to shrink and rapidly ages out of the workforce. Moreover, China’s current reliance on investment-driven growth can no longer deliver the profitability it once did. Economic issues now take a backseat to party control and national security. The business environment continues to degrade. Rapid indebtedness has reduced the available room for economic stimulus. Among the most affected are local governments with weak financial prospects and high indebtedness.

The downside risks associated with our latest forecast are again heightened. The concentration of power in the hands of Xi Jinping increases the potential for policy missteps or poor policy generated in the absence of any dissenting voices. The risks confronting the financial sector continue to rise with increasing indebtedness, problems in the real estate sector and zero-covid policies. Geopolitical risks have been exacerbated by Russia’s invasion of Ukraine and China repeating its long-term goal of uniting Taiwan with mainland China. This has caused many countries and firms to re-evaluate their dependency on China in an entirely new light. Intensified competition among the major economies and ongoing technological decoupling have increased the uncertainty facing foreign firms operating in China as well as firms linked to China via their supply or production chains. On the upside, higher growth for China is possible if it relaxes its zero-covid policies and opens its borders sooner than our basic scenario assumes.

Our latest China forecast was presented at BOFIT’s China briefing on October 31. The event included discussions on the consequences of China’s rising debt, Finland’s dependence on Chinese manufacturing and increased competitive frictions among the main global trading blocs. A video of the event, which was conducted in Finnish, is posted at the above link. 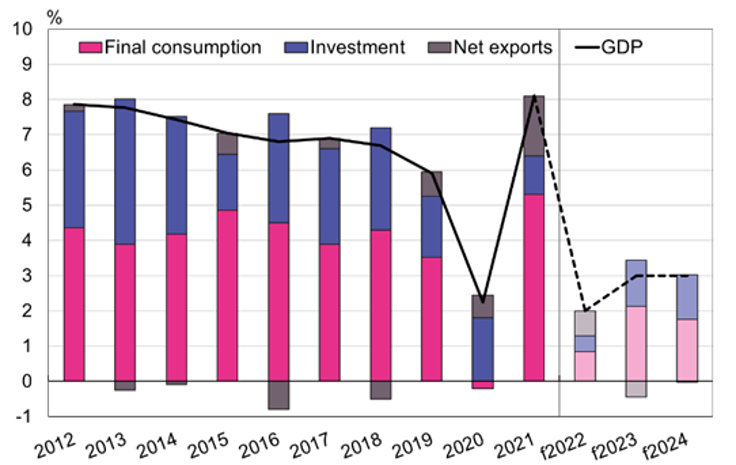