The drop in household incomes gained slight momentum in the third quarter, falling by 2.5 % y-o-y in real terms. The drop so far has been less precipitous than in the recessions of 2015–2016 and 2020. Real disposable incomes, i.e. income after taxes, interest payments and other necessary payments, were down by nearly 3.5 % y-o-y.

The on-year drop in wage income, which represents nearly 60 % of household income, slowed in real terms to less than 3 % in the third quarter. Real wages in the corporate sector were fairly stable all summer even with the kick-in of economic recession and a sharp decline in government subsidies to companies. Real wages in the government sectors, in contrast, were down by about 6 % y-o-y in the third quarter.

High inflation has also meant that government social support programmes have not managed to keep up with the loss of household purchasing power. For the first three quarters of this year, the value of social support benefits was down by 3 % y-o-y in real terms. Notable variations 0f social benefits within several past years have depended partly on the speed at which the country’s leadership has responded with additions to social support. For example, an extra pension increase to compensate for higher inflation was implemented on 1 June. Instead, social supports plunged on-year in real terms in the third quarter. Some of this drop reflects the high basis of autumn 2021, when pensioners received large one-time payouts. Social supports represent about a fifth of the sum of Russian household’s income.

The on-year decline in household capital income in the third quarter was notable. Both dividend income and household interest income were apparently down. While bank deposits have increased somewhat from last year, deposit interest rates have fallen back since last spring and real interest rates are strongly negative.

Real incomes of individual entrepreneurs increased last year and even this year. So far, this year is completely opposite to the decreases seen in previous recessions. Furthermore, economic activity this year has fallen especially in trade branches which have accounted for over half of the sales income of small private businesses. It appears that small business owners, in anticipation of a prolonged recession and very weak prospects, may have decided to pull out income from their businesses while they can.

Other household income, which accounts for over 10 % of total household income, increased sharply in the third quarter – a pattern quite distinct from previous recessions. Income in the “other sources” category, which is not itemised, includes statistical discrepancies in household incomes, spending, saving and borrowing. 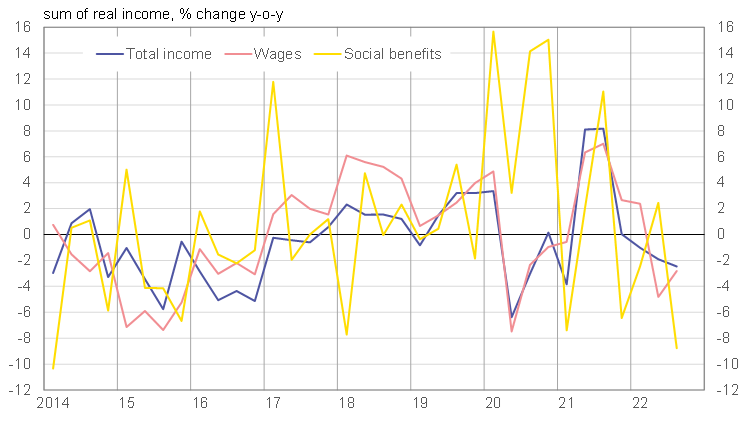