Dollar appreciation depressed the yuan-dollar exchange rate in the end of September to levels not seen since 2008, when the yuan-dollar exceeded the 7.2 mark. The People’s Bank of China called on market participants to support the yuan, causing the yuan’s exchange rate to appreciate slightly. On September 30, one dollar bought 7.11 yuan. The yuan has depreciated 12 % against the dollar since the start of the year. Chinese markets have been closed this week due to the National Day holiday.

The yuan’s slide against the dollar is largely the result of dollar’s strength. The yuan has strengthened against most other major currencies, 11 % against Japanese yen and 2 % against euro since the start of the year. The euro-yuan rate is currently about 7.1. The USD’s trade-weighted index (DXY) was up by 17 % from the start of the year, while yuan’s nominal effective, or trade-weighted, exchange rate (NEER) was at the end of September on the same level as at the start of this year. The yuan’s real effective exchange rate (REER), which takes into account differences in inflation rates of China’s main trading partners, has weakened by 3 % this year.

The PBoC has made several attempts at slowing the yuan’s decline against the dollar. On September 15, the central bank lowered its foreign exchange reserve ratio requirement from 8 % to 6 %. Effective September 28, the FX forward trading reserve requirement was resurrected and set at 20 %. Use of the FX forward reserve requirement was suspended in 2020 (BOFIT Weekly 42/2020). The PBoC’s measures basically increase costs of short-selling of the yuan and aim to discourage speculation on the currency. Shorting can be a profitable for investors when a currency faces an extended depreciation episode, but large-scale short-selling increases in deprecation pressure of the currency and can lead to a snowballing effect. In any case, the measure has signalling function, i.e. the PBoC uses it to indicate its level of satisfaction with the current exchange rate. When these measures proved insufficient to stop the recent slide of the yuan against the dollar, the PBoC released a warning on one-way forex speculation and encouraged key market participants to seek balance in the market. Reuters reports that China’s big state-owned banks were ordered to be ready to sell their dollars to prop up the yuan if the situation persists.

As the US Federal Reserve has continued to raise interest rates and tightened monetary policy in an effort to deal with high inflation, the dollar is expected to keep strengthening for a while. The yuan depreciation and China’s degraded domestic economic outlook have raised fears of a large-scale capital flight. The value of foreign-owned assets of mainland China stock and bond markets has fallen this year. China restricts movement of capital out of the country and officials can increase restrictions if the pressure to move money out of the country increases. 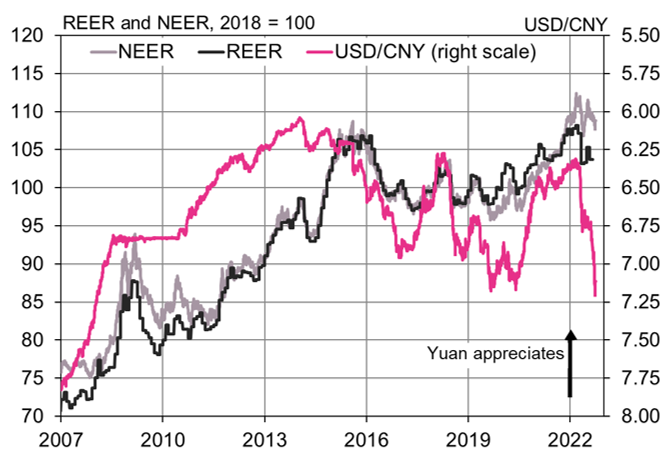