After a nearly month-long closure, the Moscow Exchange has been opened gradually. Trading has still been quite limited, however. For example, foreign investors must wait until today (Apr. 1) to sell any of their shares. Even with the lifting of the ban on selling shares, however, foreign investors cannot repatriate their assets from Russia due to capital controls. The restrictions on the stock market were intended to quell market volatility. The Russian government also made an earlier decision to support the stock market by purchasing Russian shares using 1 trillion rubles (0.8 % of GDP) in government assets. At end-March, the ruble-based MOEX index was up by 9 % from the end of February, when the stock exchange was shut down.

The ruble’s official exchange rate set by the CBR has recovered to near pre-war levels in recent days. Much of the ruble’s comeback reflects the impacts of restrictions and guidance imposed by Russian officials. The demand for ruble is mainly created by Russian export firms that are required to convert 80 % of their forex earnings into rubles. Exporting firms are enjoying massive export earnings as commodity prices are high and (for the moment at least) sanctions only are directed at a small slice of Russia’s exports. The conversion of rubles into other currencies is strictly regulated, so the supply of available rubles is relatively small. The European Central Bank has suspended the publication of a euro reference rate for the ruble as it views it is not in a position to set a reference rate that is representative of prevailing market conditions.

The current market trends seem quite disconnected from the rest of the economy. A company survey by Russia’s Gaidar Institute for Economic Policy (IEP) found that the business expectations of industrial firms saw a sharper decline in March than in any earlier Russian economic crisis. Rosstat’s March company survey also found that the six-months-ahead outlook of manufacturers was bleaker than at the start of the covid pandemic. 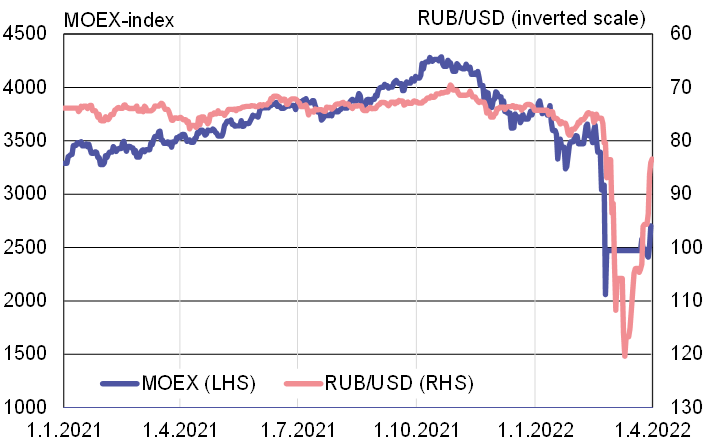