At its scheduled meeting on March 18, the Central Bank of Russia’s board decided to keep the key rate unchanged at the unprecedented level of 20 %. At the end of February, the CBR was forced to raise the key rate from 9.5 % to deal with the collapse of the ruble in the wake of Russia’s invasion to Ukraine and to prevent a run on bank deposits. Since the key rate hike, Russian banks have increased their deposit rates for ruble accounts, which has reduced depositors’ enthusiasm to pull rubles out of banks and hoard ruble cash. CBR governor Elvira Nabiullina stated that the rate hike was a temporary measure to stabilise the situation and that the rate would eventually be lowered.

Inflation has flared in Russia since the start of the war on Ukraine. Russia’s economic development ministry estimates that consumer prices at the start of March were up 14.5 % y-o-y. The CBR expects inflation to remain higher than previously expected both this year and next. Nabiullina underscored the importance of avoiding price controls, as that could slow economic adjustment to the new conditions and eventually lead to a reduced and lower quality supply of goods and services. While the CBR expects Russian GDP to contract over the coming quarters, it is set to publish its new GDP forecast in April.

Nabiullina also announced that the central bank will temporarily purchase government bonds on the Moscow Exchange to assure liquidity and mitigate volatility as trading restarts. The purchased bonds would be sold off on the financial markets once the situation stabilises.

President Vladimir Putin has proposed Nabiullina for a third five-year term as central bank governor. The Duma is expected to confirm Nabiullina’s appointment in the near future. Nabiullina assume the CBR governor post in 2013.

The CBR’s main reference rate, the key deposit rate, continues at the historically unprecedented level of 20 % 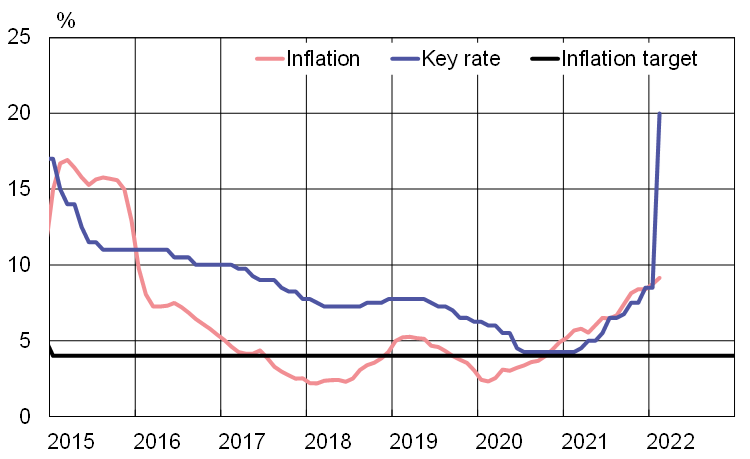