Consumer prices have skyrocketed since Russia’s invasion to Ukraine last month. Import prices shot up with the ruble’s collapse. Prices of many food items have also been driven up as households have hoarded products in fear of deficits. Only few consumer products are directly affected by sanctions.

Consumer prices were 8.9 % higher last week than at the start of January. There are large differences in the price shifts of various products and product categories. Large price increases, for instance, have been seen for sugar (up 46 % from the start of the year), carrots (up 42 %), tomatoes (56 %), onions (43 %), cabbage (64 %) and bananas (54 %). Although part of the price increases are seasonal in nature, wintertime per se does little to explain most of the upsurge. Prices of many durable goods have also risen sharply, even for goods that are manufactured also in Russia. Television prices are up by 31 % from the start of the year, passenger cars up 21‒29 % and smartphones 17 %. On the other hand, administratively set rates for utilities and services such as heating, public transport and household natural gas supplies have seen only small adjustments.

A company survey made by the CBR at the beginning of this month found that its indicator for corporate inflation expectations for three months ahead produced the highest reading ever since the survey was launched in 2002. According to the various forecasts collected by the CBR in the second week of March, inflation should hit 20 % this year. The international economic survey firm Consensus Economics expects 12-month inflation in Russia to be around 22 % in December 2022. 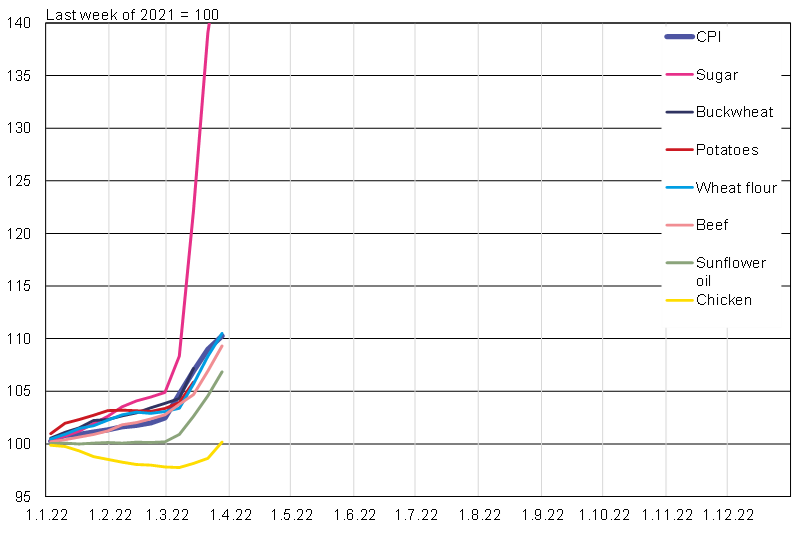