China’s finance ministry reports that the combined budget revenues of central and local governments rose by over 10 % y-o-y last year in nominal terms, about two percentage points more than forecasted. Major tax revenue streams, including corporate taxes and value-added taxes, were up sharply from 2020. Many other tax revenue streams also increased. Tax revenues currently account for about 85 % of budget revenues in China.

Budget spending last year roughly matched the 2020 level, despite the policy adopted a year ago by China’s decision- makers to increase the budget expenditure by 2 %. Growth slowed in some of the biggest spending categories, including education, social security and employment. Spending on healthcare, environmental protection, agriculture and culture declined, while growth in debt-servicing costs remained brisk.

China’s official definition of general government expenditures and revenues is narrowly drawn and does not correspond to internationally accepted practices. For example, China’s official figures exclude the extensive off-budget activities of local governments such as the use of local government financing vehicles (LGFVs) and numerous public funds. The IMF produces broader, internationally more comparable figures for China’s general government. The IMF figures show that the public sector deficit has been running at over 10 % of GDP for many years. Last year’s deficit amounted to 16 % of GDP, or about one percentage point less than in 2020. With persistent large deficits, cumulative public sector debt already equals slightly over 100 % of GDP.

The fiscal conditions of Chinese local government vary widely. An increasing number, however, are struggling under massive debt, especially with the current contraction in the real estate sector and consequent depression in sales of land use rights (an important funding source for many local governments). Even so, the State Council has been lately prodding local governments to take on more debt and invest in infrastructure projects to assure that economic growth targets are hit. 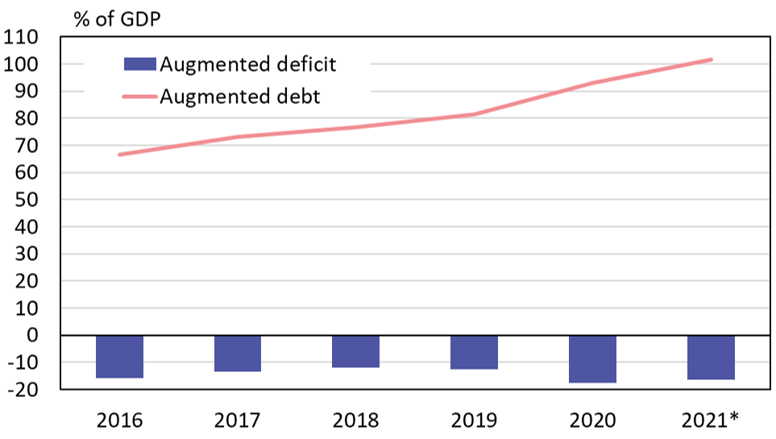