Russia’s economy ministry released estimates for the recovery of GDP from the 2020 recession. In the fourth quarter of last year, GDP was up by nearly 5 % y-o-y and about 4.6 % for all of 2021. By the ministry’s calculations, 2021 GDP growth from two years previous was 1.8 % and nearly 3 % in the fourth quarter.

The recovery in household consumption of goods and services slowed in 4Q21. Growth from two years previous in the fourth quarter was less than 0.5 %, down from about 1.5 % in the first three quarters of 2021. Consumption in November was depressed by a roughly week-long covid shutdown, as reflected in lower retail sales. While retail sales revived in December, they were still up by only about 3 % from two years previous, a weaker performance than the 4–5 % growth in January-October.

Household real incomes overall were up by about 1.5 % from two years previous in 4Q21. Growth was about 2 % for all of 2021. The pace of recovery in real household incomes varied considerably last year, due in part to a directed one-time payout to pensioners and select government employee groups in conjunction with the Duma election last autumn as well as the timing of social support spending during 2020. Excluding pensions and other social support measures, there was essentially no growth in real incomes from two years previous either in 4Q21 or all of 2021. On the other hand, real growth in household wage income from two years previous was over 4 % both in 4Q21 and all of last year.

With a 6 % bump in 2021, construction increased rapidly among production activity branches. This came on top of the 2020 figures which have been revised upwards and showed a slight increase also in 2020. Goods transport increased by over 5 %, recovering roughly to the 2019 level. Output continued to rise in the mineral extraction sector in the final months of 2021 as crude oil production recovered, due largely to relaxation of OPEC+ production ceilings and continued strong growth in natural gas production. 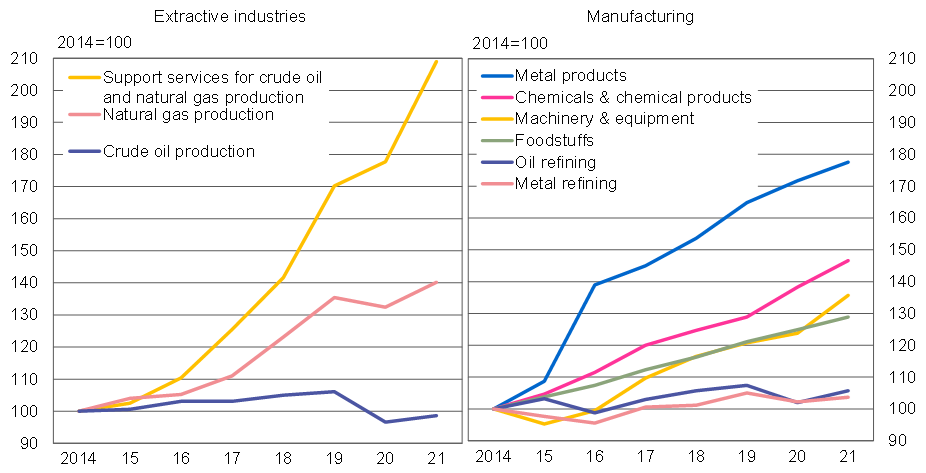